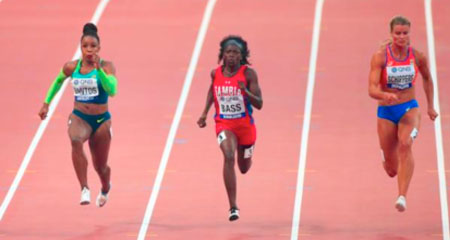 The 24-year-old recorded an impressive timing of 7.16 seconds, breaking her personal best.

Gina Bass dominated the final of the race in front of Swiss runner Ajla del Ponte, who finished second with a timing of 7.27 seconds.

President of The Gambia Athletic Association Dodou ‘Capi’ Joof, in an interview expressed delight with Gina’s latest achievement, describing Miss Bass as a hardworking athlete whose achievement was no surprise to Gambians.

He added that Gina is not only making the nation proud but also making Gambia popular in athletics.