Dr. Abdullahi Shehu the Director General of Inter-Governmental Action Group against Money Laundering in West Africa (GIABA) has called on GIABA member states to demonstrate a high political commitment in the fight against money laundering and terrorist financing at the international, national and regional levels.

Dr. Shehu said this yesterday at the Coco Ocean Hotel during the start of a three-day Regional workshop on Anti-Money Laundering and Combating Financing of Terrorism (AML/CFT) requirements for non-bank regulators and supervisors organized by GIABA in .

The objectives of the workshop are to sensitize supervisors and regulators of non-bank financial institution on AML/CFT; to also acquaint participants with the implementation of AML/CFT compliance with cultural required arrangements for efficient and sound financial system; as well as promote networking among operators in the region that will facilitate information sharing and dissemination on AML/CFT issues.

The GIABA boss said that in response to the devastating effects of money laundering and related criminal activities in West African countries, the authority of heads of state of ECOWAS established GIABA as a specialized institution with the objectives to: protect the national economies and the financial and banking systems of member states against abuse through the laundering of proceeds of crime and the financing of terrorism; improve measures and intensify efforts to combat money laundering and terrorism financing in West Africa, and to strengthen co-operation amongst its members.

He said GIABA was established to ensure a full roll out and diligent implementation of acceptable international standards against money laundering and terrorist financing, including the Financial Action Task Force (FATF) 40 plus 9 recommendations.

Dr. Shehu said money launders always strive to be ahead of the law enforcement, exploiting any existing loopholes, and deploying sophisticated gadgets and complex methodology to beat the law.

Therefore, to ensure that our region is free from the threats and risks of money laundering and terrorist financing, member states are required to, among other things, provide adequate financial and material resources for the appropriate authorities involved in the fight against these menaces, enforce full reporting compliance by reporting entities, especially the financial institutions, facilitate the adoption of risk-based approach to AML/CFT compliance system by financial institutions, promote financial inclusion by integrating the informal financial system with the formal financial system without undermining AML/CFT controls, and keep abreast of emerging developments on AML/CFT requirements, including directives of G-20 to FATF on corruption, and those recommendations that are undergoing revisions, as well as jurisdictions that are classified by FATF as high risk.

He reminded the Government of the regarding its commitment to implement the recommendations in its mutual evaluation report, which was adopted in November 2008.

He said GIABA had supported The Gambia with the services of a consultant who reviewed the AML/CFT legislation of The Gambia, and based on the report of the consultant a draft bill was produced, noting that while some progress have been made in some areas, a lot more needed to be done, especially with regard to the presentation of the bill to the Gambian Parliament and fully establishing and equipping the FIU with better office accommodation and skilled staff. 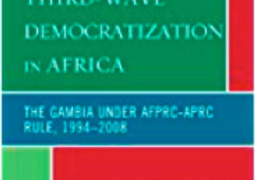