Speaking at the presentation ceremony, the first-vice president of the Gambia Football Federation (GFF), Abdoulie Star Jallow, said he was glad that GFF was delighted to present prizes to the teams after settling arrears.

Ted Mcewan, a representative from First-Eco Partners, said his company is delighted to sponsor the Gambia Football Federation division one league for the next three years.

Mcewan revealed that GFF had done a “tremendous” job, adding that they would increase their sponsorship and package and also switch their attention to other areas such as the female first and second division leagues in the near future. 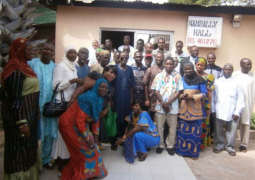