The head coach of Steve Biko, Abdoulie Bojang, is still nursing high hopes that his team can still win the 2012-2013 Gamtel-Gamcel-sponsored GFF division one league title despite Sunday’s goalless draw against Brikama United at the Brikama Mini Stadium.

Bojang stated that they knew the game would not be easy and beating Brikama United in Brikama is always very difficult but his boys did play to the best of their ability and failed to score the goals of their chances.

Bojang further stated that it was a very difficult game because Brikama United came into the game to bag the maximum points in order to remain in the division, which made the game very difficult.

Bojang revealed they are still leading the race with a single point ahead of second-placed Real De Banjul, and trailing third-placed Armed Forces and fourth-placed Gamtel on two points and a point respectively.

Bojang added that they tried to improve on their weaknesses ahead of their last league game against Hawks, who will be playing for pride. 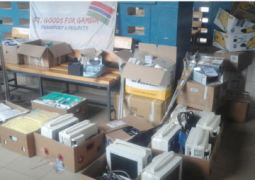