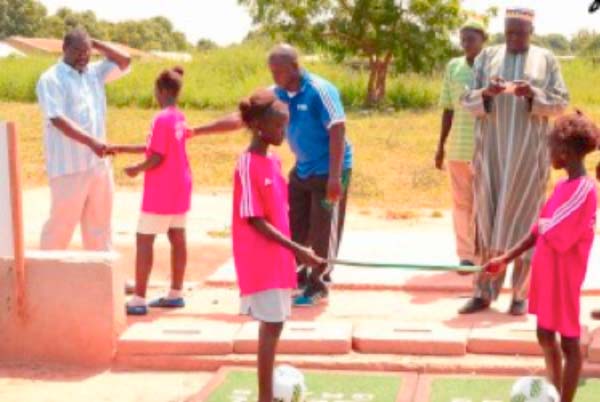 The Gambia Football Federation has officially commissioned the FIFA-funded artificial playing turf constructed in Jarra Soma over the weekend.

The ceremony was the culmination of the 4th edition of the FIFA Live Your Goals Girls festival staged in the Lower River Region of Jarra Soma.

Speaking at the official opening of the edifice, the LRRFA President Ansumana Sanneh first thanked Allah for the blessings showered on the GFF and all football stakeholders for witnessing the historic occasion.

“This is the first-class artificial turf to be built in rural Gambia and the LRR is the first beneficiary. Our profound thanks to the GFF and the Ministry of Youth and Sports for making this turf a reality in the LRR. We in the LRR will very soon become the best region in football development,” Sanneh said.

GFF president  Lamin Kaba Bajo also disclosed plans to build a modern and multi-purpose sports complex at the Mini Stadium to incorporate other sports to be played at the site.

The newly built playing turf in Soma is the 5th FIFA Goal project that the GFF is currently enjoying and has come at a time when Gambian football has opened its tentacles to a four-year strategic football development plan under the leadership of President Lamin Kabba Bajo.

Mr Bajo at the opening of the turf accompanied by LRR GOVERNOR Salifu Puye and Chief of Jarra West Alh Yaya Jarjusey remarked that The Gambia is making significant progress on Women football development.

He said the GFF and its partners are very much conscious of women football and thus has prioritized the sector as its top most agenda.

Mr Bajo said the newly built turf will play a significant role in their quest to decentralize football across the country hence according to him, football is an industry and all youths should be actively involved in.

Sainabou Cham, the chairperson of the GFF Women Football Committee in her remarks said the FIFA Live Your Goals Festival is an event which plays a key role in the Federation’s drive to develop women football in the country.

he further noted that the event is geared towards promoting and encouraging the participation of women in football.

The event is also meant to create the platform for women’s football to go from strength to strength with more females becoming lifelong participants in the sport of football.