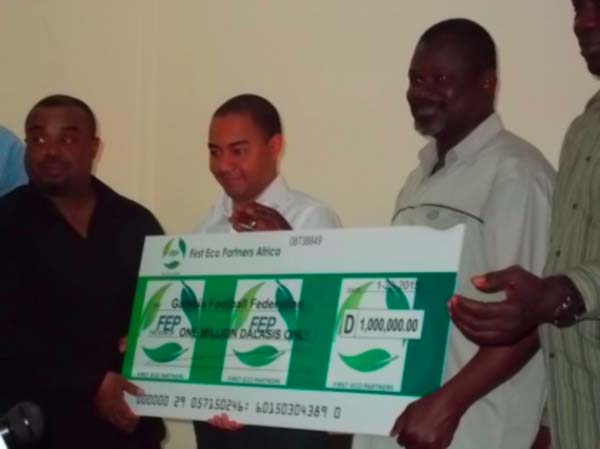 The D1 million per year partnership for a period of three years, includes the provision of sporting materials such as 100 footballs, sets of jerseys to all the first division teams bearing the logo of the company, a giant trophy and replica of the GFF trophy.

Speaking during a press briefing at Football House in Kanifing on Thursday, GFF President Lamin Kaba Bajo said the GFF executive has been yearning for this day, describing it as “a dream come true, because we all know in sports, football in particular, it is very difficult for administrators and managers without sponsors.”

Securing a sponsorship package for the league had not been forthcoming in the past years, and Bajo said the partnership with First Eco Partners will in no small way help capacities the GFF to manage the league. “We started it modestly with our own meagre resources; thus the intervention of our partners will greatly complement our efforts. We desperately needed the partnership so that our part of our meager resources can go to other purposes.”

Ted Mcewan and Michael Bahsoon of the First Eco Partners believe by sponsoring the league, it can help the company in selling its name to the general public, they said, and thanked the GFF for the opportunity and privilege given to their company to be its partner in the development of football in the country.

“To have this opportunity to come on board is actually a dream come true, not only for our business but for the fact we can help promote and develop football in the country,” said Ted Mcewan, who hoped his company and GFF will be great partners as they both have the same vision.

Michael Bahsoon added: “I have a passion for football myself, and the decision to sponsor was easy to make. First Eco Partners is a company that is very passionate about renewable energy and sustainable energy and, as a company, we feel that it is time that Africa catches up with the rest of the world. We hope this will be lasting partnership with the GFF.”

Speakingearlier, Ebou Faye, GFF 2nd vice president, said it is a good deal for the development of football in the country, because ‘the executive promised to make sure that all its programmes are sponsored’, which has started with a sponsor for the league.

He, therefore, thanked First Eco Africa Partners for the trust and confidence it has in the GFF executive, resulting in sponsoring the league, while looking forward to more of its kind.

While thanking GFF executive member Modou Sowe for facilitating the deal, Faye added that the GFF executive is still looking for other avenues to get sponsors for the 2nd Division and Female leagues.

Abass Bah, GFF secretary general, said the ceremony marked an important day in the history of Gambian football, particularly for the ongoing First Division League. He said the deal is something the GFF has been yearning for and working toward getting a sponsor for the league.

“There is no doubt that this presentation will play a very crucial part in the development of league football in The Gambia and football, in general. I think we here today have contributed in no small measure in ensuring that the young ones that are coming are included in our development agenda, and that is what exactly the new dispensation is all about.” Bah added that the Kaba Bajo-led GFF executive have done a lot so far, and will continue to do more.

Describing the deal as timely, he assured all that the GFF will do all within its power to strengthen the partnership.

The ceremony was chaired by the GFF media officer, Bakary Burama Baldeh

First Eco Partners (FEP), an energy company based in the UK and founded by Michael Embed Bah was launched in The Gambia at a local hotel in 2014.

The organization was formed from a concept that, in partnership, they can achieve great things, improve the engine, cut the cost of everyday energy for residents, business and governments while changing and improving lives through renewable and sustainable initiatives.

The African arm of the company is lead by one of the First Eco Partner’s director Ted McEloen, who has continued the vision of the sustenance and renewable energy concept tailormade for the African region, and they will continue to offer their expertise and great services that allows them to stay ahead above the rest.

Their goal is to help produce the greenest and most cost-effective power source, because they care about what they do; they don’t simply provide a sale, instead they provide a service that is built on trust and longterm relationships. 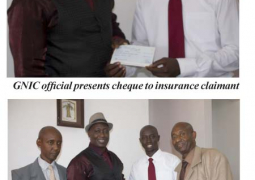