Reports reaching Pointsports desk from the media officer of the Gambia Football Association (GFA) has confirmed that Seedy M.B. Kinteh, president of the GFA, has duly been appointed as Member of the FIFA Development Committee.

The news followed the announcement by the FIFA President Joseph Sep Blatter at the 61st FIFA Congress in on 31 May and 1 June 2011 that the composition of the FIFA standing committees shall be revised and completely restructured.

A press release dispatched to media houses yesterday also stated that the GFA supremo Seedy Kinteh has become the first Gambian ever to take up the FIFA top position.

Here, following, is the full text of the press release:

Following the announcement by the FIFA President Mr Joseph Steep Blatter at the 61st FIFA Congress in Zurich on 31st May and 1st June 2011 that the composition of the FIFA standing committees shall be revised and completely restructured, the President of the Gambia Football Association, Mr Seedy M.B. Kinteh, has duly been appointed as a Member of the FIFA Development Committee.

Mr Kinteh’s appointment to the third largest committee in the FIFA structure means he has become the first Gambian to occupy the top position and hence among a few Africans serving in the committee.

He also serves as a committee member in the CAF Inter-club Committee headed by CAF President Issa Hayatou.

Kinteh became President of the Gambia Football Association in 2005 and subsequently in 2010 to present where in both periods he stood unopposed ushering in a new development sequence in Gambian football hence the array of successes registered during his tenure.

Seedy would be warmly welcomed by the FIFA family at the world football governing body’s next meeting soon in . In this regard, the Gambia Football Association wishes Mr Kinteh success and enjoyment in this new role at FIFA and takes this opportunity to thank and congratulate His Excellency the President Sheikh Prof Alh Dr Yahya A.J.J. Jammeh for his personal support to the ever-growing Gambian football and to all other persons, partners and institutions who in one way or the other contribute to the success of Gambian football earning Mr Kinteh another new lease of football administration at the global stage. 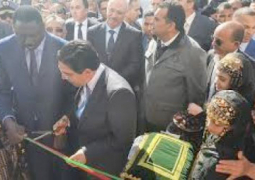