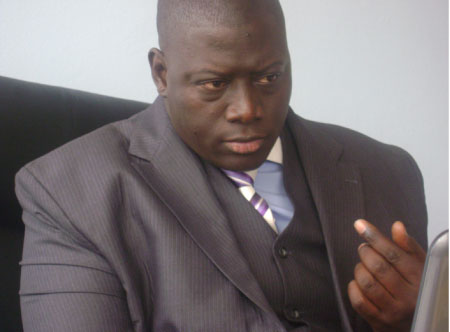 As the Gambia Chamber of Commerce and Industry braces up for its 6th biennial trade fair to commence on 2 February this year, the chamber’s Chief Executive Officer has disclosed that the private sector apex body is also in conversation with the Ecowas Commission on the feasibility of having an Ecowas trade fair held in the Smiling Coast of Africa.

CEO Almami Taal made this statement yesterday at the GCCI Kerr Jula Secretariat on Bertil Harding Highway in Bijilo while briefing journalists on the upcoming GCCI Trade Fair slated for 2 through 16 February this year at the Independence Stadium.

He said: “We are also in conversation with them [Ecowas Commission] to harmonise the trade fair calendars in West Africa, so that beyond our region we can attract each other to our events; because we have to accept that we are part of the regional integration organization and there are potentials, which we can leverage on.

“And we all know also that our tourism is one of the backbones of our economy; so any event that is going to draw attention to The Gambia we should welcome it.”

Mr Taal also said the GCCI 6th biennial trade fair this year is organised to encourage principally their members and Gambia businesses to have the opportunity to interact for a period of ten days, especially with investors, entrepreneurs and exhibitors from within and outside The Gambia, such as other African countries, Asia and Europe, as it is staged to expose and promote investment opportunities in The Gambia and to develop linkages between Gambian and international businesses through Business-to-Business (B to B) meetings.

“From our last trade fair we knew that at least seven or eight Gambians came back with their families to participate, especially from Ghana and the sub-region,” he noted.

Mr Taal also said the trade fair is conceptualised to encourage and promote trade and how the whole initiative could be integrated to the development and challenges of the government for the development of the national economy and commerce.

In her remarks, Trade Ministry’s senior trade economist Baturu Camara-Ceesay said the Ministry of Trade appreciates the role the private sector plays in the economic development of the country as they are the engine of growth in nation-building.

“The theme of the trade fair, [‘Expanding business opportunities for enterprises for the creation of private sector jobs’], is in line with the government’s policy, particularly the PAGE,” Mrs Camara-Ceesay said.

She added that since the beginning of the trade fair years ago, the Trade ministry has been collaborating with the GCCI but this year “we are coming in a bigger force because together with GIEPA, we are organizing a Wood Exhibition so as to expose the Gambia wood products”.

“Also the ministry is sponsoring some of the SMEs in the form of buying them stalls for them to exhibit their products because we want to expose the small businesses,” she said, adding that the trade fair is a big opportunity for businesses to take and expose their potentials.

GCCI public relations manager Beatrice A. prom, who is also coordinating this year’s trade fair, congratulated their main partners in getting the fair well conducted. These, she noted, are Zenith Bank, Global Properties and RLG, adding that Netpage is the internet partner, who will be providing internet connection to all the exhibitors.

“We will be organizing a B2B session as part of the fair to connect the foreign businesses with locals; even the local ones can meet among themselves,” Ms Prom said.

She added: “There will be training on internet for our members, particularly the women, to train them on the use of the internet for business purpose.”

She said further: “164 stalls have already been taken but there are many stalls available; so I am calling on the businesses to come forward to register before it is too late. Forty international participants are expected to participate.”

The biennial international trade fair will attract investors and exhibitors from other parts of the world, particularly Africa, Asia and Europe.

The fair forms part of the chamber’s drive to be the pacesetter in promoting Gambian businesses.

According to the GCCI, the objectives of this year’s trade fair include promoting the creation and growth of sustainable green enterprises, providing networking opportunities for local enterprises with businesses at the international level, facilitating public private partnerships, championing the creation of private sector jobs, promoting the exportation of ‘Made in The Gambia’ products and services, increasing inter-regional trade, and highlighting investment opportunities in The Gambia.