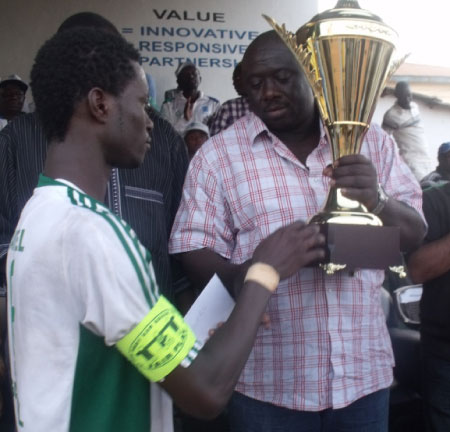 A goal in each half from Ali Sowe and Nabi Darboe was all but enough for Gamtel to retain their FA cup title for the second year in succession in a dramatic style in the Super cup final played at the rejuvenated D9.6 million KG5 Mini-Stadium in on Saturday.

The telecommunications giants, Gamtel, laid a hard fought encounter and in the process went home with a giant trophy with D30,000 as the curtain raiser champions at the expense of the disappointed GPA side whose poor run of form in recent times is showing no sign of abating.

They lost what appeared to be their first serious competitive game since their dismal exit from the Caf club champions league at home to Jaraaf of Senegal recently.

Nabi Darboe's powerful strike in the 55th minute sent coach Mustapha Manneh and his charges into a huge celebration, which has confirmed their second consecutive FA cup success in two years.

Speaking to reporters shortly after the game, the joyous Gamtel coach, Mustapha Manneh, said he was extremely delighted with the victory, adding: "Time has come for Gamtel to taste trophies, after years of top tier football competition without many trophies." He said further: "We capitalised on GPA's mistakes to punish them and we also allowed them to play their own game."

He thanked the management of Gamtel for "a very good job" done in terms of their financial contribution, which he said resulted in their success.

Peter Bonu Johnson, head coach of the Gambia Ports Authority, for his part, said: "It was sad that we lost the game."

Bonu heaped praises on the determined Gamtel team, saying they (Gamtel) were a more determined side than the GPA and therefore, deserved to win the game.

Bonu, whose tactical changes failed to bear any fruit, attributed his side’s poor performance to injuries of some of his star players and has vowed to defend the title they won last season.

"We will now focus on the league so that we can defend it," added Bonu, whose GPA's side consoled themselves with D20,000 for been the runners-up

He also used the opportunity to apologise to GPA fans for the team's dismal showing, which saw them throw away several chances to win the Saturday's final.

Seedy M.B. Kinteh, president of the Gambia Football Association, took the kickoff of the final, played under a low turnout at the capital city of .