The national GSM operator has given substantial amount of food items to 50 of its customers who were lucky to be selected in its raffle promotion called Ndugi Tobaski.

Gamcel held the promotion's raffle draw at its head office in Kanifing on Friday, which saw the 50 lucky customers went home with 50 rams, 50 bags of rice and 50 gallons of 20-litre vegetable oil.

Speaking at the presentation ceremony, Ramou Nyass, senior marketing manager of Gamcel, said: "Gamcel did not just pick people on the streets but that we selected from those who were loading the D100 scratch cards (into their Gamcel sims)."

Mrs Nyass said that last year they gave out only rams to their customers but this year, they gave out rams, bags of rice and cooking oil as well.

She said Gamcel came up with the initiative of giving rams to their customers to ease the Tobaski demands on them, adding that the company is always out to meet the satisfaction of its customers, through its services as well as its corporate social responsibility.

Gamcel's Marketing Operation Manager Nyima Cham, for her part, said the company decided to give rams to its customers because they realised that it has become expensive to afford by many people nowadays, especially towards the Tobaski.

"This was why we came up with this promotion," she said. "We are giving not only rams to our customers but also rice and cooking oil, to make things easy for our customers during the Tobaski."

According to her, loading the D100 scratch card to one’s Gamcel line means contributing to national development as Gamcel is the national GSM operator out to serve the people of The Gambia better.

She commended the company's customers for their loyalty to it and for patronising its services, programmes and promotions.

In her remarks on the occasion, Awa Jobarteh, sales manager of Gamcel, said they would always try their best to satisfy their customers and make life easy for them through their services and programmes of corporate social responsibility.

Gamcel’s roaming service manager Awa Ceesay spoke also on the numerous services and promotions the company offers to its customers.

The programme was chaired by Mustapha Ceesay, product development manager of Gamcel. 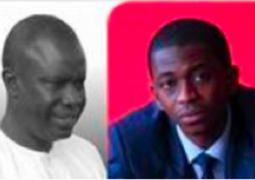