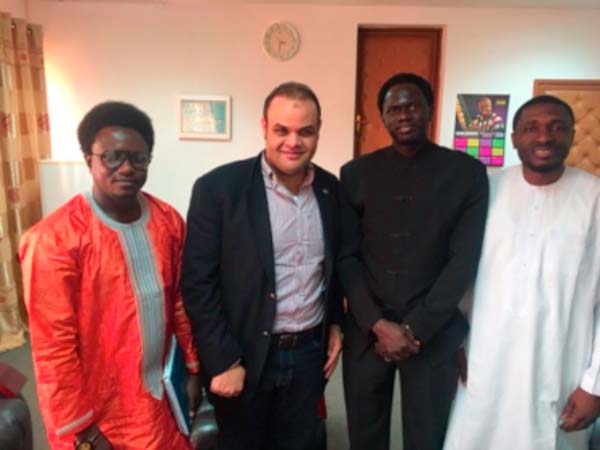 The newly-appointed Gambia’s Honorary Consul to Egypt, Hatem Saad Raslan, Monday met the Minister of Information, Sheriff Bojang, at his office at the GRTS building.

Mr Raslan’s visit was to meet the Information minister to discuss with him development issues, ranging from training programmes to strengthening the bilateral relationship between the governments of The Gambia and Egypt.

He reaffirm his readiness to work with the Minister of Information and the Gambia government to create more opportunities, and to engage with other partners to see how best to contribute to the social development of both countries.

Speaking to the press, Mr Saad Raslan said: “I’m delighted and more than happy to be the first Gambian consul to be appointed to Egypt. I will make sure I work to expectations for the benefit of the two governments and countries.”

He added: “When I assume office, I will work with the government of Egypt in the areas of tourism and culture, trade and above all in the area of agriculture as we know Egypt is doing well in terms of agriculture.”

He said he would do everything possible to strengthen ties in all areas beneficial to both countries.

Momodou Edrissa Njie, GYIN National Coordinator in The Gambia, said the government of Egypt is ready to work with the Gambia government, especially in the areas of trade, health and agriculture.

He said Egypt is known to be good in agriculture, adding that the ties would also help in bringing more investors to The Gambia to invest in many other areas of interest and of benefit to the country.

This assistance, Mr Njie added, will also include training of journalists and fellowship programmes, which would be of immense benefit to the country.