More than 2000 people on Friday gathered at St Theresa’s Primary School to celebrate the 2nd Edition of the open-air production of the passion of the Lord Jesus Christ.

Senior government officials, as well as other international organisations, attended the occasion.

His Lordship Rt. Rev. Robert Ellison has given permission for the 2nd Edition of The Open-Air dramatised Passion of Our Lord Jesus Christ, according to St Mathew based on the Book from Jerusalem to Calvary, launched by His Excellency, President Yahya Jammeh.

Sixty actors and actresses were at the celebration to perform. In his opening statement, Rt. Rev Robert Ellison, Bishop of Banjul, welcomed all those who came to attend the programme.

Robert Ellison thanked the Almighty God for making the celebration a success. “In his recent Apostolic Exhortation - Verbum Domini (The World of the Lord), Pope Benedict XVI tells us that the World of the Lord, in which we find ourselves before the Mystery of God who has made himself known through the gift of His Word, especially when that Word became flesh in the person of Jesus of Nazareth,” Ellison said.

The Bishop emphasised that during the month of March, the Network of Bible Storytellers (NOBS) came a second time to The Gambia from the USA to help people to dig deeper into the meaning as well as the mystery of God’s Word.

“They believe that by telling the stories of the Gospel and the Bible during our Liturgies (instead of reading them), we can touch the hearts and lives of those who listen in a deeper way,” he said.

“Our own Network of Lecturers has opened up the riches of the Word of God both for themselves as well as for our communities by the way in which they prepare to proclaim that Word The spirit of the Lord is moving across the void of our hunger and thirst for the living God.”

According to the Bishop, “this year we will have an opportunity to attend and participate in a second Open Air Dramatised Passion of our Lord Jesus and Stations of the Cross.”

He commended Mr George Gomez for the mammoth undertaking which will take place on Friday before the start of the Holy Week.

“Let us seize this moment as an opportunity to focus our minds and hearts as we enter the week, which we call Holy,” he said. “By using the medium of drama, we are helped to grow into a deeper awareness of this great mystery of our faith; Christ has risen, Christ will come again.”

He added: “It is my prayers and my hope that each of us may come to know Him more fully, the power of His resurrection and the fellowship of His sufferings. In this way, we too hope to be raised together with Him from death to life.” 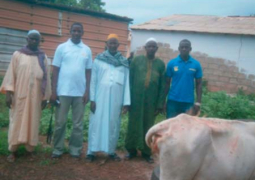