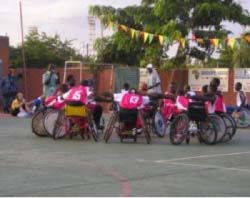 Fifteen-man delegation of the Gambia Paralympic team yesterday returned to Banjul with pride after winning both the basketball and wheelchair tournaments in Kaolack at the weekend, Pointsport hasreliably gathered.

The Gambia Paralympic team managed to put up a remarkable performance and in the process snatched both the titles of the basketball and wheelchair competitions in grand style at the tournament held in .

The 2009 event coincided with the 16th anniversary celebration of the July 22nd revolution of President Jammeh's administration.

The delegation returned home yesterday afternoon amid a heroic welcome by officials of the Paralympic committee among a host of other top sports personalities.