The Gambian government, in association with the Islamic Development Bank, has launched The Gambia Lowland Development Project. The project will run over a five year period. The official launch took place at the Baobab Holiday Resort and those gathered were told that the project aims to improve food security and alleviate poverty.

The project has been built around nine components namely rural infrastructure, lowland development and borehole drilling and irrigated land development. The project will be based at Yundum and will be implemented in all nine districts of the Western Region.

In his opening statement at the event, the permanent secretary at the Department of State of Agriculture, Mr. Bakary Trawally, said the objective of the project was to improve food security and alleviate poverty. He said that the potential area for rice cultivation in the Western Region is 22,400 hectares and that out of this a total of 2,500 hectares is being cultivated. He stated that the project aims to cultivate a total of 1,400 hectares out of the remaining 19,900 hectares in the five year period the project will run.

In this five year period the permanent secretary said it is hoped that 27,000 farm households, with a total population of 393,000 people will benefit.

He further stated that it is hoped that milled rice production will be increased by 7,000 tonnes a year which is equivalent to foreign exchange savings of USD$ 2 million.

He finally said that projections show that the incomes of farmers, who are mainly women (95%), will increase from D5,500 per ha/year to D22,000 per ha/year. 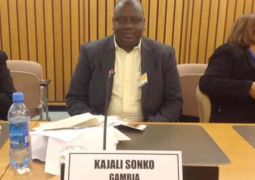