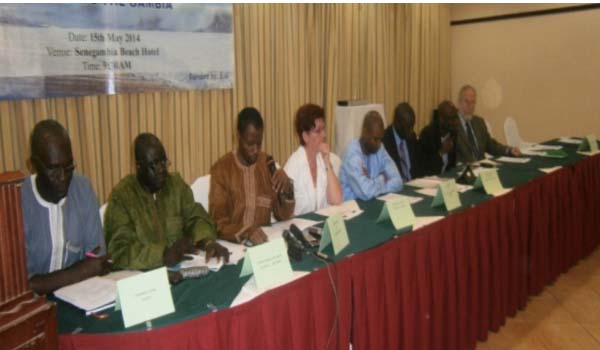 The Gambia-EU Cooperation Thursday launched the Global Climate Change Alliance (GCCA) for The Gambia, at the Senegambia Beach Hotel, funded by the EU.

The GCCA was launched in 2007 by the European Commission to support developing countries that are most vulnerable to climate change.

The Gambia is among 38 countries in 8 regions that are currently benefiting from the GCCA funding.

In The Gambia, the overall objective of the GCCA Project was to contribute to the capability of government and people of The Gambia to adapt to climate change variability and change.

The project also aims at contributing to the mainstreaming of climate change into development planning.

Speaking at the launching, Agnes Guillaud, EU Charge D’ Affairs, said the aim of the programme is an integrated management and mainstreaming of climate change.

She added that the Global Climate Change Alliance was launched by the EU in 2007 to support the most vulnerable developing countries to improve their ability to deal with the challenges brought by climate change.

She said the Global Climate Change Alliance targets 38 countries including The Gambia, as well as 8 regions in the sub-region, which are benefiting from the funding.

Abdoulie Jallow, PS, Ministry of Finance and Economic Affairs, said the project was funded by the EU to the tune of 3.86 million Euros as part of the EU’s Commission’s global support to developing countries that are most vulnerable to climate change.

He said the project is intended to strengthen national level capacity to plan for and respond to climate change impacts on coastal areas and to contribute to mainstreaming climate change into development planning.

He said climatic events like flooding have in recent years become less predictable and more severe in terms of impacts and frequency.

PS Jallow said communities in The Gambia’s low-lying coastal regions are especially at risk, adding that coastal areas close to the capital, Banjul, have higher rates of poverty and people are heavily reliant on natural resources like fisheries and marine resources for their livelihood.

Demba Bah, Ministry of Energy, Parks and Wildlife, said there is scientific consensus based on an overwhelming body of evidence that global climate is changing.

He said warming of climate system is unequivocal and since in the 1950s, many of the observed changes are unprecedented over decades to millennia.

He said the atmosphere and ocean is warm, sea-level has risen and the concentrations of green-house gases have increased.

Bah added that in view of the concentration of socio-economic activities and cultural assets in low-lying coastal areas, The Gambia is particularly vulnerable to climate change impacts, including sea-level rise, increased saline intrusion and flooding from drainage congestion during torrential rains.

He said the risk of climate change related damaged to human and economic development in coastal areas of the Gambia is on the rise.

He said the compound effects of the sea level rise and change in river discharge, erosion of coastal embankments and changes to natural sediment dynamics pose a serious threat to the natural resource base and livelihood of coastal communities including tourism.

Dynamic FC sail to second round in East qualifiers