Gambia entertains no dialogue on homosexuality with EU

The Gambia government has made a strong and open declaration that it will no longer entertain any dialogue on the acceptance of homosexuality with the European Union and any other bloc for that matter.

Read on State TV on Friday and Saturday night by the Gambia’s Minister of Foreign Affairs, Bala Garba Jahumpa, the government declaration also links the mass deaths of African migrants on European shores and the healing of Europeans of the Ebola virus whilst Africans are dying of it in thousands as a smack of racism. The declaration also states that The Gambia, in the same vein, will never be a party to the Economic Partnership Agreement (EPA) with the EU, as “it is designed to continue the exploitation and impoverishment of the African continent”.

Here, following, is the full statement of the Gambia Government declaration:

We the Government and people of The Gambia hereby make it very clear to the European Union and any outside bloc that wants to impose acceptance of homosexuals as a precondition for aid, that we will never accept that conditionality no matter how much aid is involved.

As from today, we are no longer going to entertain any dialogue on the issue with the European Union or any other foreign power for that matter. Our country’s socio-economic development depends only on the Almighty Allah’s benevolence.

We also hereby declare that The Gambia will always be an independent, dignified Allah-worshipping Muslim country, where our way of life, our laws will be based on our Islamic values, that is, the strict adherence to our Islamic faith. This being the case, any agreement, convention or protocol that is at variance with our Islamic faith, economic prosperity and our national security interest will be surely rejected outright.

We will never be a party to such decadence and will never ratify such conventions.Our laws are promulgated to ensure peace, security, and our African and Islamic heritage will be strengthened and enforced to the letter and spirit and will not be repealed.

As an independent Muslim country, we will not be tied to any bloc that promotes decadence and ungodly behaviours that are not only satanic, but they are also detrimental to human existence such as homosexuality, especially when it is used as a precondition for receiving aid. In fact, homosexuality has no place in our African heritage more so our Islamic values.

As an African country, we will also work with all Africans to put to an end to the mass murder of young Africans and African migrants on European shores, with whatever means necessary, as we will not sit down and watch this racist genocide continue unabated.

If the European Union is really interested in the protection of homosexuals in Africa as a human right, why are they slaughtering young and decent African migrants in their thousands on European soil? The people of The Gambia in particular and Africa in general can no longer be fooled, exploited or subjugated in this 21st century and beyond.

We hereby call on all Africans to stand up to defend our race against the phenomena of racism and violence against the Black race.

Africa is a continent and not a village and is, therefore, strong enough to stand against this brutal killing of young people simply because they are Black.

When Europe was very poor and on the verge of mass starvation, they came to Africa and looted our resourcesthroughextraordinary brutality for more thanfourhundred years, leaving behind a verydesolate, poor and highly underdeveloped African continent. The consequences of European occupation of Africa range from abject poverty and reversing the continent back to the Stone Age with endless proxy wars and endemic destitution.

Today in the 21st century, all Africans should stand up shoulder to shoulder to put up a definite end to this humiliation and subjugation of our race. In doing so, we should be aware also that there arecertain African leadersthat are workingfor themin this evil and racist crusadeagainst Africa and Africans, and they facilitatethe continued looting of African resourcesby the same forces that enslaved Africans, who still believe that we Blacksare monkeys and not humans andthereforeshouldnot benefit from our Allah-given vast natural resources that we haveon the African continent.

This being the case, the Republic of The Gambia will never be a party to so-called EPA with the European Union, as it is designed to continue the same exploitation and impoverishment of the African continent.

We will rather die than be colonized twice, enslaved twice and be robbed of our resources, our dignity and our humanity twice.

Our relationship with any country or any bloc will be based on mutual and the respect of the sovereignty and independence and religious values of our country.

We will longer be a member of any sub-regional, regional and international bloc or organization that will allow the continued racist exploitation and humiliation and the looting of the African continent in particular and the Black race in general.

In conclusion, we are no longer going toentertain any dialoguewith the European Unioneither directly or throughthe sub-regional, regional and international blocs to which we are members.

Allah willing, we will continue to develop our country in dignity and prosperity with our independence and Islamic values intact. We will also continue to depend on and worship only the Almighty Allah.

It is high time that we Africans wake up from our deep and detrimental coma. If the case of Ebola is not a glaring example to all Africans, then not only wouldn’t we come out of our current comatose position, but we will become extinct.

Whilst Africans are dying from Ebola, Europeans that is (i.e.) Whites are being cured of Ebola. The message is very clear for even frogs to understand.Why can’t we Black Africans and our leaders understand this situation?

As Gambians in particular and Blacks in general, we will defend our Islamic religion and Black race at any price. We will never be any Whiteman’s punch bag again.

May Allah bless this great nation! May Allah also protect the leader of our July 22nd Revolution, who is also the President of the Republic of The Gambia, His Excellency Sheikh Professor Dr Alhaji Yahya Abdul Aziz Jamus Junkung Jammeh. 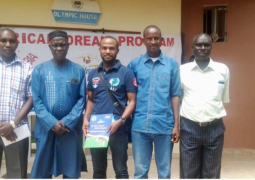