The leader of Gambia Democratic Congress (GDC), the newest political party in The Gambia, has said the party is a social democratic party consisting of a community of Gambians from all walks of life.

Speaking to the press yesterday at Baobob Holiday Resort in Bijilo, Mamma Kandeh said the membership of the party have drawn the lessons of the past 51 years of independence and are convinced that Gambia can do better, if all are committed to working together.

The flagbearer of the party, Mr Kandeh, said Gambians have come to a crossroads in the country’s history, and it is up to each individual adult Gambian to decide where to go henceforth.

“The GDC believes in the egalitarian treatment of all persons irrespective of their social, cultural, educational, political, religious and economic differences of origin in the context of a multi-party environment,” said the former National Assembly member for Jimara constituency (in the Upper River Region) for the ruling APRC party.

“The GDC believes in government of the people, by the people,” Kandeh told reporters.

Speaking to the press for the first time since the GDC was official registered as a political party, Mr Kandeh said the party’s manifesto spells out the issues the party wishes to address when elected into office.

However, he added, it should not be misconstrued that the party can “singlehandedly solve all the problems of the country” within a short period of ten years.

Such belief “would be unrealistic”, because solving the current problems cannot happen overnight.

“However, we can and we do commit, within the period allowed by the Constitution, to putting political power into the hands of Gambians so that together we build the essential and unshakeable foundations of a strong democracy,” the GDC flagbearer said.

The GDC’s democracy will have all the necessary checks and balances that will give The Gambia the chance to succeed as a country, to better the life of people and become a proud member of the community of nations.

The GDC leader further stated that after 51 years of independence, it is sad that “The Gambia is still struggling” to be economically viable as a nation state.

“The country has accumulated a budget deficit of alarming proportion, while the productive capacity of the population continued to go down. The country is at risk of an implosion because self-interest has become the driver for those in positions of authority; hardship is felt in all sectors of the economy.”

Mr Kandeh said he has no illusions about the difficult road ahead, but he trusts the capacity of Gambians to come together at “this critical time” to do what others believe is impossible.

“I am convinced of the potential for unparalleled success that is within our grasp, if only we can reach out across divisions and self-interest and put the country first without alienating potential partners; yesterday’s enemies can become tomorrow’s friends and allies,” he said.

According to him, there is an urgent need for the Gambian economy to be re-structured to focus it on job-creation and job satisfaction for all workers; to make it an economy “that works for all Gambians”.

A strong economy in a fair society is an economy that ensures equal opportunity for all, irrespective of who you are, where you were born or what religion you practice, he went on.

The leader of the country’s newest party said his government will stand for hard work, decency, tolerance, justice, compassion and fair play.

He said:“We want to ensure that people’s fundamental rights are respected not only in theory, as prescribed in the Constitution, but also in practice.

“No public servant should carry out orders contrary to the rule of law or take the law into their own hands or consider themselves above the law.Respect for human rights includes the freedom to enjoy all the rights guaranteed by our Constitution and international law, especially freedom of speech, association and religion.”

Broadly speaking, Senegal and Gambia are one people, therefore, anything that causes disunity between the two states is to be avoided, Mr Kandeh said.

On the issue of gender, the GDC leader said women are at the centre of the party’s policies and programme, as it makes “no sense for any country to use only 50 per cent of its brain power to govern.”

“This is even truer for a developing country that does not have the means to fully take care of the needs of its people,” he said.

“We expect to put in place a substantive women’s empowerment policy with the ultimate goal of attaining a 50% representation of women in all public appointments, and at the party’s conferences and congresses.”

On education, Mr Kandeh said the GDC is committed to quality education for all, ensuring affordable access to all levels of education and training for national human capital formation.

The party, according to the flagbearer, is also committed to quality healthcare delivery, and harmonised social protection initiatives.

He said the party will put in a remuneration structure that will make the civil service more efficient, and the government institutions and public resources will not be used for political ends.

On the judiciary, Mr Kandeh said the GDC’s starting point to ensure judicial independence is to separate Attorney General’s Chambers from the Ministry of Justice.The Ombudsman’s office will also function independently with the full range of duties.

While calling on people to join his party, Kandeh said the GDC is committing itself to the type of change that will put the country fully in the hands of the Gambian people. 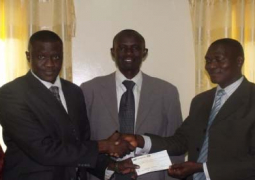