According to Benedict Jammeh, the allegations were that David Colley, Director of Prisons brought a carcass of a dead bull and fed prisoners with it as a result some prisoners died. He said it was also alleged by the accused Musa Suso that one Batch Faye presently serving at Mile II brought two satellite discs for the prison but that this was diverted to the personal use of David Colley.

According to Benedict Jammeh, the accused Musa Suso also mentioned one Sedia Jatta who painted prison trucks on the accused person's influence. He said the other allegation was that Ebou Khan a friend of the accused Musa Suso, gave fuel to the Director of prisons David Colley on the influence of he the accused (Musa Suso). He added that there are other allegations that he could not remember. He revealed that he recorded two cassettes and that the audio cassettes were kept by him and handed over to the then CMC who is now the present IGP.

The case was at length adjourned until 13th March 2009. 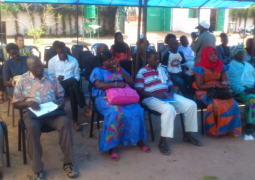