The project is scheduled to go on from 2011 to 2014 and from 2014 to 2017 for another signed development project for their members across the country.

Briefing journalists about the new project, the executive director of GADHOH, Dodou Loum, said the vision of GADHOH is “Empowerment, equity and barrier-free society for deaf and hard of hearing people”.

“Our mission is to promote equal opportunities and full participation of deaf and hard of hearing people in an enabling environment in the developmental process,” he said.

He highlighted some of the activities carried out by his organisation since 1992 to date, noting that GADHOH is having a good relationship with the Gambian government under President Jammeh.

The coordinator of the Finnish project, Landing Badjie, said the new project between GADHOH and the FAD started in March 2011 after they attended the 15th World Federation of the deaf in , in 2007.

After that consultation meeting with the FAD executive, they sent a Finnish national coordinator on deaf and hard of hearing to carry out some visibility study at GADHOH, which has led to the new development.

“This project will promote more advocacy for GADHOH members on the rights of deaf people so that hearing people through this project can change their attitude towards deaf people,” Mr Badjie said, adding that since the inception of GADHOH in 1992, the Finnish project is one of the biggest projects GADHOH has had.

“It will help a lot in improving the activities of GADHOH programs by the time it phases-out,” he noted.

The financial officer of GADHOH, Ebou Bobb, said his association got the aid from two sources, namely the Finnish Ministry of Foreign Affairs, who contributed 90 per cent of the project finance, and the Finland Association of the Deaf (FAD) 10 per cent.

“For the project, 45,000 euros will be transferred based on quarterly instalments of which as at this month 20,000 euros has already been transferred,” he said. 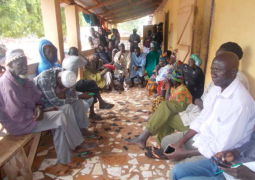