Mr Lamin Sanyang, Financial Attache at the Gambian Embassy in the was yesterday arraigned before Principal Magistrate Edrissa Mbai of the Banjul Magistrates' Court charged with funds Received by Agents for . He Vehemently denied the charge.

According to the particulars of the offence, the accused Lamin Sanyang some time in the month of March 2008 at Banjul and diverse places in The Gambia received the sum of USD 26, 761 from the Gambia Government for the purchase of Rock Master Drills, 5 pieces of VTX 620 (13HP) drill machine, and failed to deliver the items received in exchange for the money and thereby committed an offence.

However the presiding Magistrate overruled the prosecution objection. According to him the reason advanced by the prosecution was not enough to deny the accused bail and also the offence is a bailable one.

He subsequently granted the accused bail on the following conditions: The accused shall have two Gambian sureties who must provide the court with two leasehold properties within the Greater Banjul area. Such properties must value at least one million dalasi each. The accused must deposit to the court all his travelling documents. He must be reporting to the Banjul Police Station to the OC every Friday between 9am and 12pm. 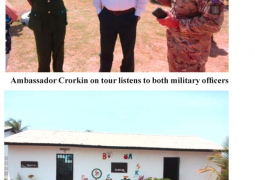