At the height of our Lord Jesus’ popularity, the Pharisees - the religious authorities in Jerusalem at the time – were feeling rather uneasy because everywhere He went large crowds thronged Him. He had become the centre of attraction. His popularity constituted no doubt a major obstacle for the Pharisees. To avert any head-on collision, our Lord Jesus withdrew to some of the surrounding towns and villages where He taught and preached. “Therefore Jesus no longer moved publicly among the Jews. Instead he withdrew to a region near the desert, a village called Ephraim, where He stayed with His disciples.” (John 11:54)

But according to His diary, the Passover feast was drawing nigh, signalling it was time for Him to get closer to Jerusalem to prepare for the cross. With this in mind, as He approached Jerusalem, He asked two of His disciples to “Go to the village ahead of you, and at once you will find a donkey tied there, with her colt by her. Untie them and bring them to me. If anyone says anything to you, tell him that the Lord needs them, and he will send them right away.” (Matthew 21:2-3)

That Jesus rode on a donkey to enter Jerusalem as a king – His Triumphal Entry – was not a mere occurrence. Prophet Zechariah had around 520 B.C. prophesied: “See, your king comes to you, righteous and having salvation, gentle and riding on a donkey, on a colt, the foal of a donkey.” (Zechariah 9:9) And so prophecy was fulfilled because the disciples went and found it just as Jesus had instructed them.

They placed their cloaks on the donkey and Jesus sat on it. “The people spread their cloaks on the road while others cut branches from the trees and spread them on the road.” As they went ahead of Him, they started singing: ‘Hosanna! Blessed is he who comes in the name of the Lord! Blessed is the coming kingdom of our Father David! Hosanna in the highest!” (Mark 11:9-10)

It was a spontaneous outburst of praise and adoration of their king that would be crowned with thorns. He was no ordinary king for He had come to save humanity from the shackles of sin. He had come so that all that were bound by the devil – and indeed many were enslaved by Satan and his cohorts -- would be set free, totally liberated. His kingdom shall have no end.

An earthly king would have come on the scene with all the paraphernalia, regalia and pomp displaying his arsenal of horses and chariots and ammunitions. But this King was different, for the simple reason being that His kingdom is in the heavens. Every earthly kingdom shall pass away. Our Lord Jesus after His arrest told Pilate the Roman governor; “My kingdom is not of this world. If it were, my servants would fight to prevent my arrest by the Jews. But now my kingdom is from another place.” (John 18:36)

Jesus comes to us in all humility and meekness, yet a great King, a Lion from the Tribe of Judah -- The Redeemer King. “See, the Lion of the tribe of Judah, the Root of David has triumphed. He is able to open the scroll and its seven seals.” (Revelation 5:5)

This parade through the streets of Jerusalem should serve as a lesson to the calibre of kings and presidents we have in our days. The positions and titles we hold on earth are temporary labels that we will leave behind; we cannot carry them with us to the grave. We hold offices to serve not to show off; for it is for a fleeting moment that will be over and done with sooner that we expect. It calls for a God-given vision and wisdom to be able to lead the people of God, to serve them and not be their oppressors.

The people recognised in our Lord Jesus His ability to save them therefore their cry “Hosanna!” which means “Save us!” They had wrongly thought Jesus -- whose name means, ‘He would save His people from their sins’ (Matthew 1:27) - would come in order to liberate them from the burden of their colonial masters, the Romans. Nothing of the sort! Sin is a more destructive master; for it denies you fellowship with the King of kings and the Lord of lords – the One whose reign is everlasting.

And so we witness as revealed in the Book of Hebrews, chapter 12 verse 2: that Jesus “... for the joy set before Him endured the cross, scorning the shame ...”

For some people caught up in the crowd, who could not figure out the reason behind all this excitement, and who were curious to find out; they got this answer: “This is Jesus, the prophet of Nazareth in Galilee.” (Matthew 21:11) Maybe you too are asking ‘Who is this Jesus? That answer falls far short of His real nature, character and stature.

Christ Jesus is the “One who, being in very nature God, did not consider equality with God something to be grasped, but made Himself nothing, taking the very nature of a servant, being made in human likeness. And being found in appearance as a man, He humbled Himself and became obedient to death – even death on a cross! Therefore God exalted Him to the highest place and gave him the name that is above every name, that at the name of Jesus every knee should bow, in heaven and on earth, and under the earth and every tongue confess that Jesus Christ is Lord, to the glory of God the Father.” (Philippians 2:5-11)

It is time that we recognise the King supreme as He rides majestically through the streets of our lives ready to straighten all the crooked paths and make them plain.

“If you confess with your mouth, ‘Jesus is Lord,’ and believe with your heart that God raised Him from the dead, you will be saved.” (Romans 10:9) 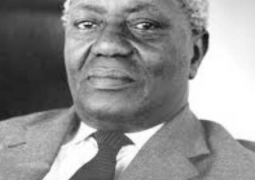