The prosecution in the ongoing trial of the embattled Campaign Manager of the opposition United Democratic Party (UDP), Femi Peters yesterday called on the first witness to help prove their case at the Kanifing Magistrates' Court.

Mr. Peters is charged with two counts of "control of procession" and "control of loud speakers", a charge he still denies.

Testifying before the court, Ebrima Manneh, Deputy Police Commander, Kanifing Division, told the court that he recognised the accused person and could very well recall 24 October 2009.

He said on that fateful day around 5 and 6pm, while at Serrekunda Police Station preparing to deploy police officers for route lining, as the Head of State was about to travel, he received information that the United Democratic Party (UDP) were holding a political rally at Ebony Junction in Serrekunda Central.

He testified that he then called the Deputy Commissioner Kanifing Division, Momodou Sowe with regards to the information, who instructed him to go on the ground to find out whether there was a rally and whether they had secured a licence to that effect.

According to him, it was when he called the Officer Commanding and one Kebba Camara to visit the scene.

He adduced that upon arrival at the rally, they found that a procession was on and went straight to the podium where they met one Mr. Fatty, an ex-police officer who was recording the one speaking, and told him about their mission.

He testified that he was then directed to the accused person, whom he approached and asked whether they were issued with a permit to hold the rally. In reply, he said he was not responsible.

He said he further asked the accused who then was responsible and he replied "I'm not in a better position to respond."

Mr. Manneh adduced that he was then directed to the party leader, Mr. Ousainou Darboe. He said while speaking to Mr. Darboe a group of youths stood up and started screaming and shouting: "Why should you come to the meeting."

Following the testimony of Mr. Manneh, the Defence Counsel, Ousainou Darboe, submitted an application suggesting for a stay of execution of the proceeding regarding the charges against Femi Peters, Subsidiary Court at the after raising inconsistency from the Public Order Act and the Constitution.

He submitted that it is the view of the accused person that the Public Order Act, particularly Section (5) of the Public Order Amendment Act are inconsistent with Section 25 (1) (d) of the Constitution of The Gambia.

According to him, "so far it makes it mandatory to obtain prior permit for any bonafide registered political party, to hold political rally as in Section (6) of the Public Order Act requiring the accused or any other person to obtain a prior written consent of any apparatus for the amplification at a political rally is in gross inconsistent with Section 25- (1) (d) of the 1997 Constitution."

He further submitted that the use of public address system is conjoined to that right as stipulated in Section (25) and (4) of the Constitution.

"Therefore any law that have the effect of imposing prior permission to exercise a right, such a law will substitute to inconsistency," he said.

He then submitted for the matter to be transferred to the Supreme Court to decide on the objections raised.

In reply, Inspector Fadera, the prosecuting officer, submitted that the Defence's should be overruled, noting that the issue before the court is not a constitutional matter or a fundamental right, which the Supreme Court has the power to adjudicate.

He added that the matter before the court is a criminal charge, which the court has jurisdiction to hear.

He went on to invoke Section 133 of the Constitution and argued that it is the High Court that can issue stay of proceeding.

According to Inspector Fadera, there was ruling on the issue on 6th November 2009, at the Banjul Magistrates' Court.

Responding to the argument of Prosecutor Fadera, Lawyer Darboe explained that the matter before Magistrate Nkea was not about constitutional validity as argued by the Prosecutor. He further elucidated that Section 133 cannot oust mandatory sections, such as Section 127 of the Constitution.

Magistrate Joseph Ikpala then adjourned the case to 23rd November 2009 for ruling. 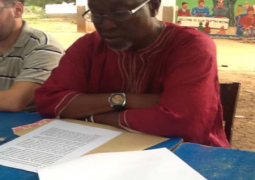