The aim of the foundation is to help young people that are interested in science to achieve excellence in academic pursuits.

FDNF also compliments the efforts of the Government in providing information, education and support to individuals and families affected by cancer.

In his opening remarks, the vice chairman of FDNF, Julius Freeman, said Francis DeGaulle Njie Foundation is a charitable foundation built to give support to students.

He said the foundation was set up in 2006 by the family of the late Francis DeGaulle Njie, with the objective of enhancing the educational system in The Gambia by providing support to the science students, to engage people in health education and promotion as well as to provide support to affected individuals and families.

According to him, the foundation has been inviting Senior Secondary School students in the Greater Banjul Area to participate in an interactive motivational lecture whereby professionals in science-related disciplines are invited as panelists to talk on their fields of study.

He said this is intended to serve as an inspiration to science students in their academic and career aspirations.

“It is also believed that such lectures will give direction to young people both in and out of school in making the right career choices,” he said.

Dr Bully Camara, from the Medical Research Council-The Gambia was one of the Healthcare Professionals that consented to serve as a panelist.

He said it was advisable to go to the University of The Gambia as a science student to study medicine than to wait for scholarships to study abroad.

“It is easier to get jobs in the science field than their other career pathways,” he added.

Lamin Marong, a senior nurse said the fundamental responsibility of a nurse is to promote health, to prevent illness as well as to restore health and to alleviate suffering.

Mr Marong added that nurses manage the basic care of patients entrusted to their charge in health institutions so as to supervise and manage hospital wards and health centres.

Ms Penda Sidibeh, a physiotherapist at the Poly Clinic said when she came back from Cuba in 2009, she realised that there was only one qualified physiotherapist in The Gambia and healthcare was one of the most important aspects of socio-economic progress in the country. 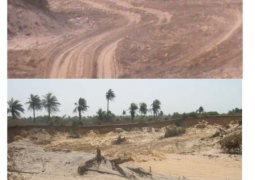