The Farato Football Association’s Secretary General, Ansumana Ceesay, has called on teams to register, following a successful tournament held recently at Farato where many teams from both Farato and the neighbourhood participated.

It would be recalled that Youki FC of Farato and Puma FC of Busumballa reached the finals, where Youki defeated Puma by 1-0.

Speaking to Pointsport, Ceesay said the committee is calling on all interested teams of both senior and junior teams to register for the upcoming football competition, due to kick off after the Tobaski Feast.

He said that “any team from the nation is invited to participate in the upcoming tournament, as it is opened to everyone”, while disclosing the registration fee as D1,500 for each team, and which should sign a bond of acceptance of the rules and regulations governing football.

He called on the government, individuals, and parastatal organisations to support the tournament.

“Finance is our main constraint. The little money we have is from the gate-takings, and contributions made by the teams”, he revealed. 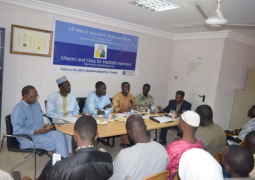