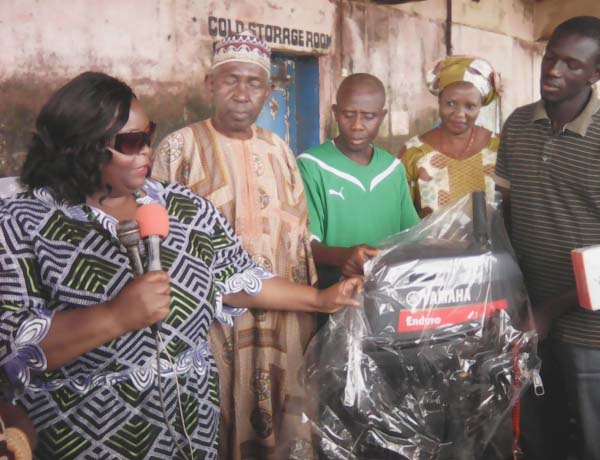 Food and Agriculture Organisation (FAO) country office in Banjul has handed over fishing materials to Bakau Fishermen and Target Beneficial Association at a ceremony held at Bakau Fish Landing site on Monday and presided over by Madam Perpetua Kalala, FAO country representative.

Madam Perpetua Kalala, FAO country representative, said telefood projects are integral part of FAO’s global effort to raise awareness and eradicate hunger and food insecurity and these are means for providing focused but strategic resources to community groups of smallholder farmers, fisherfolk and others engaged in food and agriculture value chains, including livestock, fisheries, forestry and environmental management and protection.

The telefood campaign was initiated in 1997 as one of FAO’s response to the World Food Summit goals of reducing by half the proportion of people facing hunger.

The telefood initiative has funded more than 27,000 projects in 130 countries around the world with most of the projects located in Africa.

“There have also been efforts to raise funds locally here in The Gambia to contribute to the global telefood fund, thus encourage Gambia citizens and private sector to continue to partner with FAO in this important and life-changing initiative.

“Today, over 70 projects have been funded in the area of horticulture, fisheries, forestry, apiculture and livestock in support of community groups in The Gambia.”

The FAO representative further said in The Gambia, the fisheries sector contributes to the national economy and livelihood of the population with the potential to make significant contribution to improved food security.

She said the sector contributes 12% of the GDP with an estimated 200,000 people directly or indirectly dependent on artisanal fisheries and its related activities for livelihoods.

Fish and fishery products are important ingredients of the diet in The Gambia with an estimated catches of 53,000 tons in 2015 from the artisanal sub-sector and it is also an important source of income for those engaged in fish processing and marketing many of whom are women.

Matarr Bah, director of fisheries, said the idea of the project is to create job opportunities for youth and women to improve their livelihood and cash income for the beneficiaries.

Foday Labang Jarjue said the project was launched last year in August and there has since been lot of works and communication between the FAO and the association.

Alhagie Suruwa Jaiteh hailed FAO for supporting the initiative adding that the purpose of the equipment is to contribute to alleviate poverty and food insecurity.