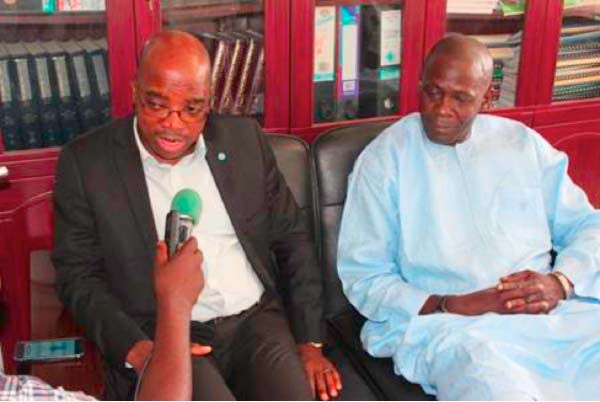 FAO and partners commit to harness the potentials of Sustainable Food Fortification to improve the nutritional status of The Gambian populace.

24th April, 2017, Banjul - The Gambian Government has joined forces with the Food and Agriculture Organization of the United Nations (FAO) in a bid to sustainably reduce the menace of malnutrition, and in particular micronutrient deficiencies which remain both a major public health and development problem for the country. Through funding from The European Union, FAO in close partnership with the Department of Agriculture (DoA), the National Nutrition Agency (NaNA), the Food Safety and Quality Authority of The Gambia (FSQA), the National Agricultural Research Institute (NARI), Private Sector Food Industries as well as Importers, the Consumer Protection Group and other stakeholders is set to develop and implement the sustainable integrated food fortification initiative. The initiative - ‘‘Improve Food Security and Nutrition in The Gambia through Food Fortification’’ aims particularly to improve micronutrient nutrition and health outcomes of vulnerable women and children in The Gambia.

This is a public private partnership initiative that will work with food industries and farmers involved in the production of staple foods to embark on industrial scale fortification, as well as the cultivation of bio-fortified food crops to increase access to essential micronutrients by the population in The Gambia, especially women and children. . Vulnerable children 6-59 months and pregnant and lactating women in food insecure households in the North Bank and Central River North Regions will have increased access to and consume more micronutrient-rich foods through both industrially fortified food staples and bio-fortified food commodities.

The initiative has integrated nutrition education as a key strategy to strengthen nutrition outcomes.  It is also designed to strengthen public and private sector capacities, build public private partnership and advance the reinforcement of regulatory systems on food fortification in The Gambia. The intervention will ensure at least 65% of the Gambian population have increased awareness and access to fortified staple foods high in essential micronutrients such as vitamin A, iron, zinc, folic acid and other Vitamin B nutrients.

Dr. Sablah Mawuli, FAO Lead Technical Officer for the project from the FAO Regional Office for Africa in Accra, Ghana concluded a week-long Technical Assistance mission to Banjul on 22nd April 2017 focusing on capacity needs assessment.  He also engaged with the various stakeholders to clarify the technical roles of different public and private sector stakeholders, and guide in the development of the detailed project implementation plan.

The FAO Country Representative to The Gambia, Dr. Perpetua Katepa-Kalala, has praised the initiative noting that Food fortification presents an attractive potential area of investment to address micronutrient deficiencies in vulnerable girls, women and children, based on its potential to provide a relatively low-cost, affordable, scalable and immediate tool in response to the challenge of eliminating hidden hunger from The Gambia.  She expressed gratitude to the EU and the different stakeholders on their commitment to improving nutrition outcomes in The Gambia. She is enthused about this initiative which will establish the enabling environment through mandatory legislation with standards on food fortification, production and distribution of fortified foods, social marketing with nutrition education under effective public private partnership Gambia Alliance on Food Fortification. Dr. Kalala explained that various capacity building and awareness raising campaigns would be organized on fortification and bio-fortification with mixed farming systems that promote dietary diversification, nutrition education and sustainable strategies for ensuring high coverage of fortified foods to address vitamin and mineral deficiencies in populations in The Gambia.

Deficiencies of essential vitamins and minerals are widespread in The Gambia with substantial adverse effects on maternal and child health and development. The Gambia Demographic and Health Survey (DHS 2013) reported that 24.5% of children under five were stunted, 16% were underweight and 11.5% were wasted while 4.2% were severely wasted. Similarly, micronutrient deficiencies continue to be a public health challenge to The Gambia with Vitamin A deficiency in preschool children estimated at 54%, iron deficiency related anemia hovering around 72% in this age group and 60% in women of reproductive age.

Mr. Modou Cheyassin Phall, Executive Director, National Nutrition Agency NaNA explained that industrial scale food fortification and bio-fortification including bio-fortified orange flesh sweet potato, cassava and beans  will play a critical role in sustainably combating micronutrient malnutrition in a manner easily accessible to food insecure communities. He noted that The Gambia Milling Corporation covering over 98% of the market with wheat flour has initiated voluntary fortification using industry standards which would now be aligned with harmonized Gambian standards to be developed on the broader ECOWAS Standard Harmonization Model (ECOSHAM). Mr. Phall also explained that the rice would also be fortified with essential micronutrient under the programme.

The Director General of the Food Safety and Quality Authority of The Gambia Ms. Zainab Jallow has also praised the intervention as timely noting that it will strengthen efforts aimed at enforcing standards and quality requirements on food fortification in The Gambia.