Ex Inspector General of Police, Ensa Badjie, will now be facing 28 counts (instead of 30), and his co-accused persons up to 16 counts, according to the charge sheet presented on Monday at the high court in Banjul.

This follows an amendment to the charges by the Director of Public Prosecutions, Richards N. Chenge, yesterday.

The counts range from conspiracy, sedition, abuse of office, to obtaining money by false pretence and official corruption.

When the amended charges were read to them, the trio maintained their plea of innocence.

However, the case could not proceed further because the third accused, Kuluteh Manneh, could not secure the services of a legal counsel.

In applying for an adjournment, DPP Chenge told the court that the prosecution would proceed with the case, even if the 3rd accused fails to secure the services of a lawyer on the next adjournment date. He then applied for the accused to be remanded in custody.

Lawyer Borry Touray, who represented Ensa Badjie and Mam Matarr Secka, made an application for the accused to be granted court bail, and also urged the court to make an order for the accused to have access to their lawyers and family members.

The trial judge, Justice Amadi, remanded the accused in custody, but said that once they are remanded they should have all the rights of a remanded person, that is, access to their lawyers and family members.

He told lawyer Borry Touray to make a formal application for their bail. The case was subsequently adjourned to 6th of May 2010. 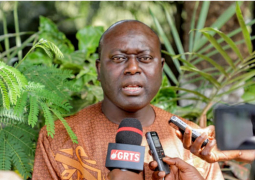