Musa Kinda Bah, an ex- Gamtel staff who was some time in June 2008 charged with two counts of giving false information to a public officer and uttering false documents, has had his case dropped.

The case, which was set for judgment at the Banjul Magistrates' Court was dropped on .

By a letter from the Office of the President dated , and read in court on 6th March, Musa was pardoned on humanitarian grounds.

The letter reads: "Executive directives have been issued for the charges against Musa Kinda Bah to be dropped. Musa was accused of inundating this office with false allegations against people. Musa is pardoned by the Executive on humanitarian grounds".

Count I stated that on or about May 2006 in the City of Banjul and diverse places in The Gambia, Mr. Bah gave false information to the Office of the President, that senior managers, directors and heads of departments of GAMTEL are engaged in malpractice, wrongdoing and nepotism. Count II indicated that on Mr. Bah uttered a false certificate to the Managing Director of GAMTEL claiming possession of a Master's degree in Business Administration (Finance major) from the in .

Mr Bah had denied the charges. The case was presided over by Magistrate Kayode 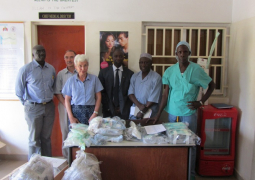