Ex-CDS Tamba, others at Supreme Court

Jailed former Chief of Defence Staff of the Gambia Armed Forces, five other senior security officers and a local businessman, convicted for treason and sentenced to death by the high court in Banjul in 2010 yesterday appeared before the Supreme Court in Banjul.

When the case was announced, Lawyer Sherriff Marie Tambadou notified the court that he had filed briefs on behalf of the appellants on 20 March 2012, and a brief of argument.

He told the court he had served a copy to the Director of Special Litigation, Daniel O. Kulo.

The deputy director of Special Litigation, Simon Abi, told the court he had seen the copy of the argument but he needed time to reply.

It would be recalled that the appellants were sentenced to death by the High Court in Banjul on treasonable indictments on 15 July 2010. 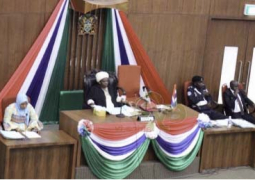