The alleged offence stated that the accused person, Ensa Badjie, in 2009 by virtue of his position as Inspector General of Police, ordered the release of one Ousman Jammeh alias 'Baka', who was arrested for a traffic offence along

Captain Fatty, who testified as the third prosecution witness, told the court that he is an ex-military officer and was attached to the Tourism Security Unit (TSU) as officer commanding.

He said that he was sacked from active service in 2009, and that he knew the accused person prior to that.

Captain Fatty added that, in 2009, he was at his office in Senegambia, when two traffic officers came with one man by the name 'Baka', who the officers claimed had problem with them at the junction of , during their normal patrol.

"I asked Baka why he did that, and before I finished talking with 'Baka', he (Baka) told me that "somebody wants to talk to you on the phone".

I took the phone from him and introduced myself to the accused person as the officer commanding TSU at . The accused told me to "release that gentleman immediately" with emphasis, saying "I am Ensa Badjie, the Inspector General of Police," he told the court.

"I then told the traffic officers that this was a traffic matter, but because we are all sister securities, they brought the case to me, but somebody just spoke to me now claiming to be the Inspector General of Police, for me to release 'Baka'. I knew him personally, and I knew it was him talking on the phone.

"I told Baka that as a good citizen, he needed to respect the security when they are executing their national duty, and told him to apologise to the officers, which he did and I allowed him to go," he further told the court.

Under cross examination by Ensa Badjie, the witness admitted being dismissed from the Gambia Armed Forces, but denied being served with a dismissal letter.

Further asked by Ensa Badjie why he did not write a petition when the incident happened, but waited until after eight months of his detention, the witness said there was a related case and, as a result, he wrote lately.

Asked whether he was charged for assaulting a police officer executing his duty, the witness responded 'yes', but said that was an allegation.

The case was at that stage adjourned till 20th April 2011. 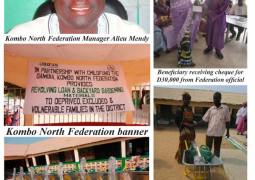