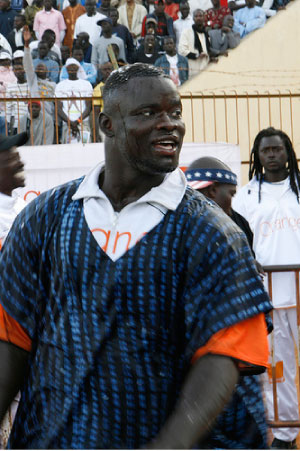 Eumeu Sene, a renowned Senegalese wrestler, Friday visited The Gambia following an invitation by one of his fans clubs called “Tay Singueu” based in Ebo Town in the Kanifing Municipality.

At 7pm, the Ebo Town Football Field was filled to its brim with supporters of the wrestler, who after seeing him on television have been looking forward to a day like that to see their hero face-to-face.

Eumeu Sene, as he is commonly known in wrestling circles, was on his way to Cassamance to see his family when he decided to make a stop to see his ever-growing number of fans in Ebo Town on Friday.

However, only a few supporters were able to see the wrestler, as there was no enough security on the ground to control the crowd for the visiting wrestler to get to his seat.

This prompted Eumeu Sene to move to a nearby compound for a few minutes where only a few fans were able to go in and shake hands with him.