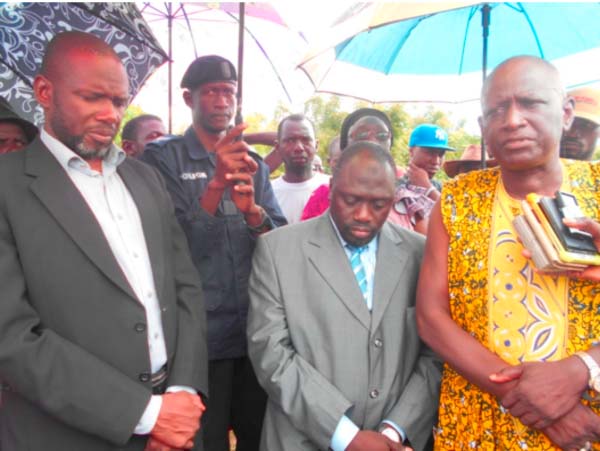 The Association of Wood Re-exporters and the forest users in The Gambia yesterday embarked on a massive tree planting and replacement of lost trees at the entrance of the Banjul airport.

The exercise that was presided over by the Minister of Environment, saw over one hundred tree seedlings being planted.

Speaking at the exercise, the chairman of the Association of Wood Re-Exporters and forest users in The Gambia, Lamin Barrow, thanked all those that were able to make it to this very import exercise.

He said the re-export trade has generated a lot to Gambia and Gambians in terms of employment, income generation to individuals and families as well as the government.

He said the exercise which started in 2013, is to embark on such tree planting exercise in one of the most important locations in The Gambia, all geared towards attracting investors.

Mr Barrow stressed on the importance attached to the re-export trade and how it has impacted profitably on the livelihood of Gambian youths.

He noted that it is a duty for every forest user to replant a tree, according to the forest Act, saying that the association decided to plant trees along the road from the entrance to the Airport.

He said this was their contribution towards complementing government’s effort in nation building, noting that as timber dealers, they have experienced and enjoyed the opportunities derived from the forest in the last three years.

Mr Barrow thanked the Civil Aviation for their contribution towards the sustainability of the previous tree planting that was carried out by the association at the airport gate.

He said there was a MoU that was signed between his association and the civil aviation to take care of the planted trees.

“We are still appealing to the civil aviation to continue the partnership with the association to ensure the nurture, growth and sustainability of the seedlings.”

For his part, the Minister of Environment, Lamin Dibba, commended the Association of Wood Re-exporters and forest users for taking up the bold initiatives.

He declared it a pleasure for him to be part of the exercise, adding that it was important as a community and association to recognise the importance of trees in the environment.

He disclosed that the new policy was looking at putting 30 per cent of the total land in the country under forest cover.

He urged the timber users to respect the law of the land, as it was passed by the National Assembly, who are elected by them to represent them in policy formulation.

Other speakers included the permanent secretary at the Ministry of Environment and the Public Relations Manager of Gambia Civil Aviation Authority, who both stressed the need for more tree planting to replace the felled and lost trees.

They also stressed on the importance attached to forest cover and commended the association of re-exporters for the initiative geared towards complementing government’s effort and mitigate the effects of climate change on the environment.