The National Environment Agency (NEA) in collaboration with the National Authorizing Office for the Global Climate Change Alliance (GCCA) with support from the EU through the EU-Gambia cooperationarrangement recently concluded a two-day training session for journalists on Integrated Coastal Zone Management (ICZM) and mainstreaming climate change (GC3SP), held at the Paradise Suites Hotel.

Salimina Jobe, the National Coordinator of the GCCA project, said the aim of the training activity was to develop journalists’ talent and skills in reporting on the environment for public consumption.

Mr Jobe added that the GCCA project is focusing on coastal adaptation and mainstreaming climate change into the overall project objective.

“The objective is to contribute to the capability of the government and the people of The Gambia to adapt to increased climate variability and change, while its specific objective is to strengthen national level capacity to plan for and to respond to climate change,” he said.

He said journalists in The Gambia require regular streams of accurate information and statistics on coastal issues, in order to write fair and balanced articles.

He said few journalists have a background in the environmental sciences, and they are not well-equipped to understand or interpret data on coastal issues.

Mr Jobe added that during the course, several presentations were witnessed on the project’s background, and explanation of scientific findings on selected topics.

With the support of NEA staff, he went on, individual journalists would prepare feature articles for publication on topics of interest.

“This is to help promote greater public understanding of NEA’s work in the sustainable management of the Gambian environment in general,” Jobe added.

He spoke of the GCCA project’s support to The Gambia for Integrate Coastal Zone Management (ICZM) funded by the European Union (EU) through the Gambia–EU Coordinator, focusing on coastal adaptation and mainstreaming to the capability into the overall project objective.

He added that this is to contribute to the capability of the government and the people of the Gambia to adapt to increased climate variability and change.

It specific objective is to strengthen the national-level capacity plan and response to the climate change impact in coastal areas, and to provide support and guidance to mainstreaming of climate change in development plans, he further stated.

According to him, the forum would present background information by staff of the NEA, and individual journalist would select topics.

With the support of NEA staff, individual journalist would prepare feature articles for publication on topics of interest.

He added that this was to help promote greater public understanding of the work of the NEA in the sustainable management of the Gambian environment in general, an aim and objective of the project in particular.

The forum is being organized as a visibility activity of the project, and also as recognition that information generation and dissemination are a serious part of the development agenda.

Focus would be on the internal resources and competence of nationals, and the environment in tackling the varied environmental issues facing the country under its programme area, he further stated.

Borry Mansa Demba, NEA programme officer for West Coast Region (WCR), said journalists are the bridge between the beneficiaries and the providers and, as such, their understanding of issues is important and critical.

“They have to gather information, but must be synthesized. It must be with professionalism because anytime they go wrong it is destructive. They have to have basic knowledge of the matter.Journalists should explore and the information must be refined for public consumption not as experts only, but as professionals,” he said.

They should even go as far as possible to simplify by breaking the information into local languages, since many of the beneficiaries understand that, said Mr Demba.

According to him, the objective of the forum is to enhance the performance of journalists in reporting on environment and climate matters for public consumption.

Previous:
The seal of the Prophets and his message
Next:
SJAG stages 6th annual award ceremony 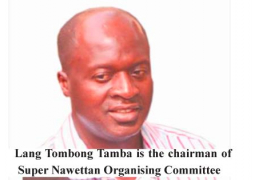