The minister of Basic and Secondary Education has admitted challenges facing the ministry in the realization of quality education in the country, which remains a daunting challenge.

This was contained in a statement by Fatou Lamin Faye, minister of Basic and Secondary Education, delivered on her behalf by Ebrima Ceesay, deputy permanent secretary at the ministry on Friday during the swearing in ceremony of 13 education Peace Corp volunteers.

According to her, the realization of quality education remains a daunting challenge, but not insurmountable.

“Hence, the fielding of these volunteers into the education sector will contribute immensely to the current efforts of improving the learning outcomes of our children, particularly in the early graders,” minister Faye stated.

The Peace Corps, according to officials, was created to promote world peace and friendship by helping the people of interested countries in meeting their needs for trained men and women, and to help promote better understanding of America to the people they serve.

The Education minister told the gathering, at the residence of the ambassador to The Gambia in Fajara, that the government through the peace corps has supported The Gambia’s socio-economic development initiatives through the idea of peace crops volunteerism, which the country has benefited from tremendously since 1967.

“The partnership built over the years has grown from strength to strength, the benefits of which is traced to the fact that almost every Gambian teacher has benefited from series of interface with Peace Corps volunteers,” she said.

She noted that the intervention by the Peace Corps will, in no small measure, add to the education sector that has already made great strides in the area of access to basic and secondary education across the six educational regions.

Cindy Cregg, charge d’affaires at the US Embassy in , who presided over the ceremony and administered the oaths, welcomed the volunteers to the start of what she said was two rewarding years.

She assured the volunteers that when they leave The Gambia in two years’ time, they will be so proud of what they have accomplished.

“Once you are done here, life would be easy. You will have new perceptions of the world and new belief in yourself; you are going man on man; one and one; head to head  to change the world and your work will contribute directly to The Gambia and Gambians,” Cindy told the volunteers.

“Absorb the new culture, live within it, but never forget who you are; your culture, your beliefs, your principles are what brought you here and what will take you home. Stay true to yourself, don’t lose yourself,” she further advised.

She reminded the volunteers that it is because of their high sense of volunteerism that they are in The Gambia to serve, while urging them to promote those principles.

The country director of Peace Corps Banjul Office, Jeffrey Cornish, commended the government for its continued support to the Peace Corps volunteers, and the valuable work the volunteers do in The Gambia.

“This year marks the 50th anniversary of the founding of the Peace Corps by our dynamic President John F. Kennedy. We have served 45 of those years in The Gambia, and that in itself is an impressive achievement, an achievement possible only with the support of the government,” Cornish remarked.

According to him, the role of Peace Corps volunteers in the development of The Gambia is to help Gambians improved their lives in a way that they themselves determine to be important, and in ways they themselves can sustain.

“Peace Corps’ mission in The Gambia is to have a trained corps of American volunteers working in partnership with the people of The Gambia to enhance individual skills, foster cross-cultural understanding, and promote lasting peace,” he added.

He said Peace Corps’ mission in The Gambia is to help train corps of American volunteers working in partnership with Gambians to enhance individual skills, foster cross-cultural understanding, and promote lasting peace.

Reaffirming the Peace Corps resolve in helping to improve the lives of Gambians, Cornish told the newly sworn-in volunteers that the idea of supporting self-determination and self-sustaining practices is fundamental to the Peace Corps approach to assistance.

OVER THE EDGE: LEGALITIES OF LIFE, OUR CHOICES AND OUR FUTURE 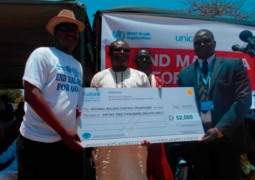