ECONOMYWATCH: Oiling the wheels of growth 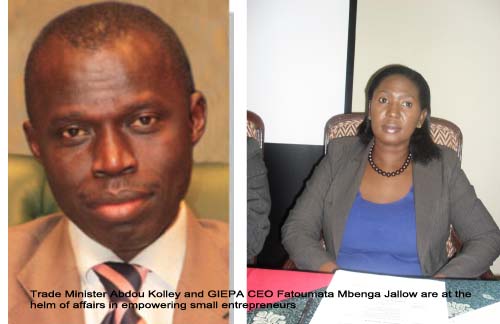 The economic emphasis in The Gambia seems to be increasingly directed at the informal sector as relevant institutions in the country continue to promote small-scale enterprises by making it easier for entrepreneurs to have access to finance, expand their businesses and generate domestic economic growth.

A week or two ago, two small-scale enterprises - Organic Food Processing and Jall’s Healthy Foods - were each awarded with D50,000 after their owners emerged victorious in a biannual business plan competition (involving14 applicants in this year’s edition) supported by the UNDP in collaboration with the Ministry of Trade, Industry, Regional Integration and Employment, and the Gambia Investment and Export Promotion Agency (GIEPA).

While finances, hand-on and other support are given to winners by these support institutions, the biannual business plan competition continues to unlock new business ideas, solutions and employment opportunities as small-scale business entrepreneurs are attracted to it.

The Trade Ministry is increasingly seen to be supporting Micro, Small and Medium-scale Enterprises (MSMEs) through improving the landscape of business registration and the provision of matching grants with the support of the Gambia Growth and Competitiveness Project and the Enhanced Integrated Framework Project.

Another initiative in which the Trade Ministry is involved is the current innovation grant under the entrepreneurship promotion and microfinance development project hosted at the Social Development Fund (SDF), a project aimed at supporting five entrepreneurs with innovative business ideas during its lifespan.

“We are currently supporting three willing entrepreneurs in the commercialization of their business ideas and will be supporting additional two by the end of the year,” says Trade Minister Abdou Kolley.

These initiatives form part of the trade ministry’s broad mandate to provide strategic support to the informal sector, respond to the current challenges faced in the sector and leverage the opportunities within it in respect of the Government’s 2008 National MSME policy.

This drive is for very good reasons. The informal sector provides more jobs than the government and the formal private sector combined.

Indeed, the biggest slice of the country’s economic pie can be said to be largely accounted for by ‘table-top’ traders, roadside vendors, street hawkers, small-scale farmers and many other small businesses which operate on the blind side of government statistics.

So it is of paramount necessity that bodies like the UNDP, GIEPA, the Gambia Chamber of Commerce and Industry (GCCI), SDF and other microfinance institutions are increasingly targeting MSMEs, as making finance and other support accessible to this sector not only serves to take many people out of poverty, it also brings the sector into the formal economy.

MSMEs play a crucial role in the socio-economic development of any nation.

Whilst unemployment remains a challenge for The Gambia, MSMEs play a fundamental role in providing employment opportunities both in the rural and urban areas, as well as in fighting poverty, reducing income disparities and fostering economic development.

Sad to say, despite their invaluable contribution to the growth of the national economy, the entrepreneur, unless he or she is from the upper class, has a landed property and/or is driving an expensive car, is often doubted and looked upon with suspicion and hostility.

Banks have no time for them; municipal authorities wage war against them at various locations; and even the public constantly complains about them.

The banks, for instance, consider informal sector operators too small to be viable and therefore try to avoid them because they lack collateral, cannot keep proper accounts, or have no permanent physical addresses.

Yet it is these people who willingly and courageously take the necessary risks to transform fresh ideas into actual businesses that create, build and grow economies.

A rethink of our attitude towards informal sector operators is quite overdue, as a nation’s greatest asset is its stock of small-scale entrepreneurs.

The most prosperous economies in the world are also those that have the largest numbers of successful small and medium-sized businesses.  The economies of the United States of America, Britain, China and even India can attest to this reality.

“If we in Africa are determined to improve our standards of living, we need to shift our vision away from the ‘grand’ business and begin to respect the small entrepreneur,” says Anver Versi, editor of African Business magazine.

The Gambia’s savings and loans industry as well as supporting institutions such as GIEPA, GCCI, SDF and others have to continue the good work and their laudable initiatives towards empowering informal sector operators such as market women, youth entrepreneurs, dressmakers, hairdressers, carpenters and many others who belong to one association or another, in order to reduce extreme poverty, create employment opportunities and generate economic growth.

‘A’ Shares: A class of share that carries different rights from ordinary shares, e.g. they are usually non-voting shares.

Banking directive: One of several directives of the European Union (EU) intended to remove impediments to the provision of banking services across borders in Europe.

Central bank discount rate:  The interest rate at which a central bank will discount eligible bills and Treasury bills.

Chicken: An interaction between different players – notable from popular culture and in the economies of game theory – in which big rewards accrue to the player who is most willing to take big risks for the longest.

Dawn raid (UK):  The acquisition of a large block of shares on the stock exchange, some times as a prelude to a take-over bid. Usually purchases are carried out simultaneously by a number of brokers first thing in the morning.

Economic and Monetary Union (EMU):  An agreement reached under the Maastricht Treaty 1992 to establish a single European currency, namely euro.

Hazard: The element of an insurance risk that, in the view of the insurer, is capable of aggravating the loss.

Interbank market: The money market in which banks borrow or lend money among themselves either to accommodate short-term liquidity problems or for the lending-on of surplus funds.