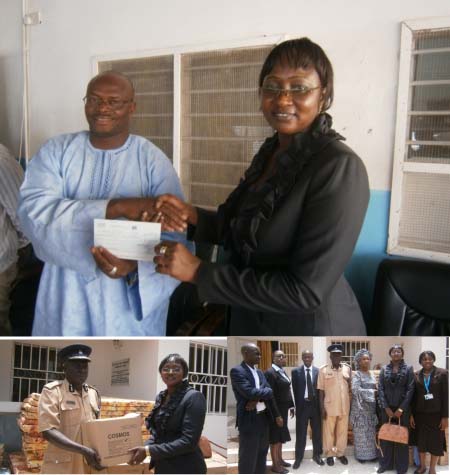 NDMA received secondhand clothing among others, whilst a cheque amounting to D70,000 was donated to Hand on Care at the Brikama Health Centre.

Speaking at the presentation at the Gambia Prisons Services, Yahya P. Jarju, Prisons Deputy Director General, said the banks had been here in The Gambia for so long but in the Prison calendar Ecobank was the first bank to donate gifts to the Department of Prisons for onward distribution to the inmates.

“We really thank and acknowledge Ecobank for this kind gesture,” he said.

He said whatever was seen in the prison came through the support and coordination of the Ministry of Interior and its staff.

He thanked Ecobank for their benevolence and they are proud to see Ecobank coming to help the Gambia Prison Services.

Commissioner Modou Jarjue of the Gambia Prison Services said government could not do everything, so for Ecobank coming to intervene in assisting the inmates was a step in the right direction.

He added that the Gambia prisons had been looking for financial support to buy mattresses for the inmates but thanks to Ecobank management for their timely intervention.

He said the donated items would take the Gambia Prisons Services a long way in addressing some of the issues at the prison.

He therefore thanked the management of Ecobank for the kind gesture whilst assuring them that the donation would be fully utilised.

Alhagie Bai Ceesay, Ecobank Kanifing Branch Manager, said it was a pleasure for Ecobank to donate the items to National Disaster Management Agency (NDMA) and the Gambia Prison Services, as well as Hands on Care.

He said Ecobank is a bank that belongs to the continent and that their mission as a bank is to see how best the bank could work closely with the Gambia Prison Services and other institutions.

Mr Ceesay said the day is called Ecobank give out day.

He added that Ecobank had a long cordial relationship with the Ministry of Interior and that was why Ecobank deemed it very fitting in supporting the Gambia Prison Services.

Fatou Jallow, head of Domestic Bank at Ecobank, explained that the donation was way of giving back to the community that the Bank was operating in.

She said the bank deemed it very fitting to plough back to those that need help in one way or the other.

She noted that Ecobank is a Pan African Bank currently operating in 35 countries and only hope that the donation would reach the welfare of the inmates and to foster the relationship between Ecobank and the prisons service.

Lamin Sanyang, head of technology, thanked the Ministry of Interior for opening their doors to welcome Ecobank to deliver a small token to the Gambia Prison Services

According to Mr Sanyang, security was the key in any socio-economic development; therefore Ecobank deemed it necessary to give a helping hand to the Gambia Prison Services.

He thanked the communities for banking with Ecobank, saying that without their participation there would be no bank and it was therefore very necessary to give back to the community.

Oumou Kalsoum Cham, senior assistant secretary at the Ministry of Interior and secretary to Mile 2 and Jeshwang Prisons, thanked the management and staff of Ecobank for the generous gift.

She said the donation was a clear indication of the bank’s commitment in giving out to the communities that the bank is operating in.

She thanked Ecobank for the magnificent gesture and hoped that the relationship would continue between Ecobank and the Gambia Prison Services.

Speaking at the NDMA office, Fatou Jallow, head of domestic banking Ecobank, said they were there to give out to the community which they operate in.

She said the management of Ecobank has the pleasure to contribute their quota to national development in complementing government’s effort in one way or the other.

Momodou Sarro Darboe, Head of Human Resources, said Ecobank would continue to do this type of gestures as part of their corporate social responsibility in giving back to the most vulnerable people.

He thanked the NDMA for their collaboration with Ecobank, which is the Pan African Bank that is accessible everywhere in the African continent.

Serign Modou Joof, NDMA deputy executive director, thanked the Ecobank family for the wonderful gesture, noting that the gesture was a worthy course and that any development oriented individual or institution should emulate Ecobank’s giant step in helping the most vulnerable people.

He said the intervention could not be overemphasised in the sense that it was the very people that are affected or infected in one way or the other are banking with the banks, so coming to give them help was a big boost.

“We must map out strategy to help the vulnerable people and with this idea from Ecobank is a welcome move,” he said.

Also speaking at the presentation of a cheque amounting to D70,000 to Hand on Care management and its board members, Lamin Sanneh, a board chairman, who is also the Permanent Secretary, Ministry of Local Government & Lands, expressed delight and appreciation with the commitment of the management of Ecobank for putting health sectors as part of their priority  intervention.

He noted that Ecobank is one of the leading banks in supporting the health sectors and thanked them for the foresight.

He urged the management and staff of Hand on Care to scale up their effort in ensuring that the money donated are put into good and appropriate use.

He also urged the management of Hand on Care to start rethinking and bank with Ecobank, which is the Pan African Bank.

He revealed that this was not the first time that Ecobank was giving support to Hand on Care, thanking the management of Ecobank for complementing government effort.