Nights Clubs around town are expected to get busy with revelling all weekend long. Yet Duplex Night Club being the newest high-class club just established is the hottest night spot within the Tourism Development Area and provides the best entertainment to party goers.

Duplex Night Club is located just opposite the Dream Park on the Bertil Harding Highway and is always overflowing with party-people every magical weekend.

In a brief chat with Entertainment at Duplex Night Club, Ramis Diab, the General Manager of the night club told Point Entertainment writer that Duplex Night Club was opened since 19th December, 2009 to provide high quality entertainment to the public. He added that it is the largest club in the country with a capacity for 1500 people seated comfortably. It comprises four bars and restaurants inside.

Dilating to some of the challenges Ramis Diab noted that it is not an easy task but one needs to have a good relation with the people. Compared to other night clubs, Duplex is a different place when it comes to how you dress.

'My club is not only visited by the local people but tourist guests too.' He therefore called on everybody to visit Duplex Night Club which operates on Sundays, Wednesdays and Fridays. Every Wednesday is a free entrance for ladies. There will be a beauty contest come April this year and winners are expected to go home with a huge amount of money, the General Manager announced. 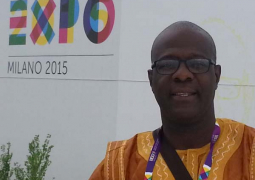 Feeding the Planet, Energy for Life