One Malick Darboe charged with being in possession of prohibited drugs, recently opened his defence at the Brikama Magistrates’ Court before Magistrate Secka.

In his testimony, Darboe said that on 19 June 2012, some officers found him at a place called City Pub in Serrekunda at around 4 a.m. standing at a junction and said they were from Bulldozer and wanted to conduct a search on them.

He said they searched them and there was a particular officer called FBI who was the first to search him and found nothing on him and another called Mr Sowe also came and searched him and after conducting the search, he went to the officers and said he found something on him.

He said he walked with them to their vehicle and went with them to Banjul. When they arrived in Banjul, they were all asked to come down, he explained, adding that they asked him to go with them to show them the place where they used to sell cannabis.

“I went with them but did not show them any place. I told them I did not know any place where they sell it,” he testified.

He said that when they returned to the office, he was asked to sit by a table and complete a document he was also asked to thumbprint.

“I was reluctant to thumbprint it but I was threatened and forced to do it. I did it and I was asked to go and sit inside. I was later granted bail and two weeks later, it was revoked,” he added.

He said they called him and said they were going to take him to the weighing office.

“Upon reaching there, they took out the cannabis which they weighed in my presence and they asked me to look at a particular place and I looked but did not see anything and they put the drug in a scale and later brought a document and forced me to thumbprint it,” Darboe explained.

“We later went back to their office and my bail was restored and the matter was brought to court,” he said. 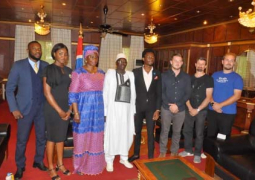