Alhaji Samba Drammeh, who was allegedly intercepted at Essau with prohibited drugs, has been finally charged.

Alhaji was arrested at a checkpoint in Essau and reportedly in possession of cannabis.

According to the charge sheet, the suspect was in November of last year arrested in possession of 1kg and 80kg of marijuana.

Alhaji had entered a plea of  'not guilty' when the charge sheet was read and translated to him in the language he claimed to  understand. 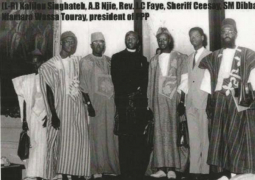