"Every good and perfect gift is from above, coming down from the Father of the heavenly lights, who does not change like shifting shadows." (James 1:17)

You most probably have ranked yourself as someone who has not had favour with God. Think again. Undoubtedly you have been looking at someone else and have tried to figure out after several vain attempts how s/he could have been blessed above you. The problem is that you are looking in the wrong direction. Stop and count your blessings one by one. Your favour with God may not have been like that of Noah, Joseph or Samuel but he has blessed each of us nevertheless. The content or the container does not matter, what does is whether you have acknowledged the little he has given you.

Some of us do not have the capacity to handle God's blessings because we are poor managers. The little he has blessed us with we have squandered without reference to him. Others wrongly believe they have made it by virtue of their hard work - that is, in their own power and strength. Nothing could be further away from the truth.

In other instances we have judged that someone is unworthy of the blessings God has bestowed on him/her; that we could have handled it better. Well, sorry to say, God knows better. God does not do anything without reason for he is driven by purpose. "And we know that in all things God works for the good of those who love him, who have been called according to his purpose." (Romans 8:28)

God knows who to endow with divine favour. He knows who to entrust with certain responsibilities, because his criterion is not subject to human standards. There may be stories of failures here and there but please note that it all boils down to our attitude. Attitude is altitude. How we relate to our blessings will mean greater blessings ahead or it could put a stop to everything. When God blesses you he blesses you for a divine purpose not for your own personal ends, or to satisfy your lust or greed. If that is what you've been thinking, you are missing the point, sadly enough.

Behaviour is a major factor in God's choice of a candidate he would bless. It is clear that we cannot force God's hand to bless us, to bestow favour on us. It is important however for us to be ready, always ready by our attitude to receive from him. In an era when the Messiah was expected in there were no doubt many of the maidens of the day who secretly nursed the thought that they could be the one God would choose. Of all those young aspirants, God chose Mary to be the one to birth the Saviour. Here is what the Angel said to her: "Do not be afraid, Mary, you have found favour with God. You will be with child and give birth to a son, and you are to give him the name Jesus." (Luke 1:20)  This same Jesus we are told "...grew in wisdom and stature, and in favour with God and men." (Luke 2:52)

That our Lord Jesus, whose name is above every other name, continues to impact the world some 2,000 years after he had ascended into heaven, portrays how much favour he had had with the God, the Father. His favour was unequalled. No one can parallel the miracles he performed or the wisdom of his teachings.

God showed favour to young Samuel: "And the boy Samuel continued to grow in stature and in favour with the Lord and with men." (1 Samuel 2:26) If you peruse the deeds of this Old Testament prophet you can measure how his relationship with the Lord was based on the special favour he had with him, Jehovah. He had an early encounter with God and most of all he was privileged to have anointed the first and second kings of : Saul and David.

Talking about attitude, there is a certain attitude that is worthy of those who seek favour with God. For the Father to find favour with us we have to be self-disciplined, trustworthy, able, faithful, just and true; these are fundamental characteristics which propel God to act in our favour. "Misfortune pursues the sinner, but prosperity is the reward of the righteous." (Proverbs 13:21)

God will not find favour in a lazy person. Favour means prosperity. God prospers you and makes you the envy of all. The case of Joseph is not unique; God prospered Daniel amidst growing opposition from the natives of the where he was exiled. Daniel and his friends were taken to the palace and were obliged to eat the king’s food. They pleaded with the servants to be spared from eating the king's food - for religious reasons. "Now God had caused the officials to show favour and sympathy to Daniel..." (Daniel 1:9) It is recorded that; "The king talked with them and found none equal to Daniel, Hananiah, Mishael and Azariah; so they entered the king's service. In every matter of wisdom and understanding about which the king questioned them, he found them ten times better than all the magicians and enchanters in his whole kingdom." (Daniel 1:19-20) Divine favour? Yes. Daniel and his colleagues were groomed to take up important posts as administrators in that foreign land.

How do you handle favour?

Many of us cannot handle God's favour too well. Either we become pompous and conceited or we begin to behave as if it is all a result of our intelligence and hard work. God intends for us to bless others when he blesses us. Whom have you blessed? With whom have you shared your blessings? The rich man who had been blessed with a bountiful harvest, thought of building bigger barns to stock his cereals. He wanted to eat, drink and be merry. He boasted of his power to produce wealth. Unfortunately for him he did not live beyond that night to enjoy it. "But God said to him, 'You fool! This very night your life will be demanded of you. Then who will get what you have prepared for yourself.' " (Luke 12:20)

Upon reflection, it was no sheer coincidence that Joseph found his way to the position of prime minister in . God prepared him an instrument in order to save his people - and his family in particular - from a severe famine that would hit the region. That famine brought Joseph’s family to in search of food. That famine reunited him to his long lost relations.

God has a plan for your life and yearns to shower favour on you. What is your attitude? Are you ready for it? Can you handle it? Won't you mess it up?

May God find favour with you because you have the right kind of heart he seeks to bless. Amen 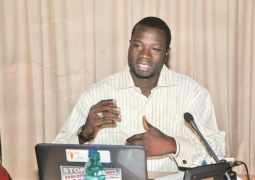