The usage of Chain Saw has always been a concern to forest officials who claim that the instrument is very effective in destroying the forest resources.

During his recent countrywide tour, Forestry Director Abdoulie Sanneh was assured by district authorities that they would equally advocate for the Chain Saw to be completely banned in the country.

Mr Sanneh, accompanied by his top forestry officials, on Sunday concluded a four-day nationwide tour during which he saw the need to stop using Chain Saw as prominent.

The purpose of the tour was to meet all the district authorities and other relevant stakeholders to discuss the issue with them and the need to protect the forest resources.

During the meeting in various regions, burning issues were raised and addressed to the director of forestry for possible solutions.

Responding to some of the concerns raised by the stakeholders, the director of forestry said recommendations will be made for a complete ban of the importation of Chain Saw into the country in due course.

He was quick to add that all Chain Saw owners should start dismantling their Chain Saws before it will be too late for them to do so.

Speaking during the first meeting at Kerewan in North Bank Region, Governor Edward Seckan welcomed the forestry delegation to his region.

He stressed that preventing the forest cover should be a primary concern for every patriotic citizen.

Governor Seckan noted that it is very sad looking at the country's environment, whose forest cover has drastically disappeared.

He said therefore that the sensitization is timely, so that the communities can take up the responsibility in the protection of the forest cover.

He then used the occasion to assure the forestry personnel that "the issue of Chain Saw will be a thing of the past" in his region. He told the gathering that any culprit found wanting "will be brought to justice".

For his part, the Chief of Lower Badibou, Fafanding Kinteh, thanked the department of forestry for taking up the initiative.

He told the gathering that looking at The Gambia, for the past ten years the Country's forest cover had reduced due to the rampant usage of Chain Saw, which he described as one of the best enemies of the forest. He added that the new proposal by the forestry department to ban Chain Saw in this country is a step in the right direction.

Saikou Sanyang, the North Bank Region Agriculture Director, expressed similar sentiment but was quick to add that there should be no flexibility when it comes to implementation. He said the forestry department should enforce the law whenever the need arises.

Taiwan donates half a million dollars for youth employment 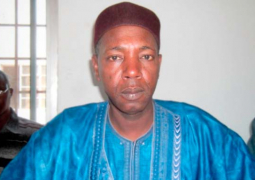