The trio are being tried on charges of criminal trespass, threatening violence, malicious damage to property among others.

In his defence testimony, the first accused, Lamin Jammeh, told the court that he lives in Gunjur and he is a narcotics officer.

He said he recognised his co-accused persons, as they are his brothers, adding that he did not trespass into anybody’s property or threaten anyone.

He revealed that it was the complainant’s family who trespassed into their land, stating that the said piece of land “belongs” to the Jammeh Kunda family of Gunjur.

DW1 further adduced that his grand parents used to lend the said land to the Sanyang Kunda family of Berrending to farm during the raining season and they would return it to his family at the end of the season.

He told the court that the complainants later started encroaching on to their land, adding that the Jammeh Kunda family then took the matter to the Kombo South District Tribunal and won the case.

At the said District Tribunal, he continued, the judgement was again entered in favour of the Jammeh Kunda family.

He added that judgement was again entered in his family’s favour (the Jammeh Kunda).

Still testifying, he told the court that the complainants were asked to vacate the said land but they violated the court order, adding that they started destroying the crops they planted.

He said the complainants later said the land was given to them by the then Governor Sankung Badjie.

“My family was led to a lot of harassment. I always advise them to take things easy, as all the documents of the judgement were with us,” he explained.

“In March 2009, to my surprise, my family went to the said piece of land and they were attacked by a group of people with sticks and cutlasses and get assaulted,” he added.

“I went for weekend and decided to visit the said piece of land. Another group of people attempted to attack me with their cutlasses. I was alone and as a trained officer, I used my pistol to defend myself,” he stated.

Mr Jammeh continued: “On 12 June 2009 I wanted to plant cashew nuts. I asked the 2nd and 3rd accused to accompany me. On our arrival at the said land, we found the children of the complainants working there and I drove them out of the land.

“On 13 June 2009, I received a phone call from one CPL Alieu Trawally, informing me that there were a lot of people complaining that I trespassed into their land and also threatened them.”

He said when he received that information, he went to the Gunjur Police Station where he found many people from Berrending and he tendered his pistol.

“To my surprise, I was called at the Brikama Police Station. I was released on bail without being cautioned and a voluntary statement was obtained from me,” he told the court. 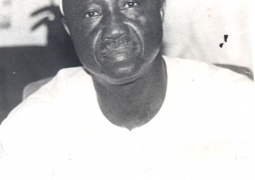