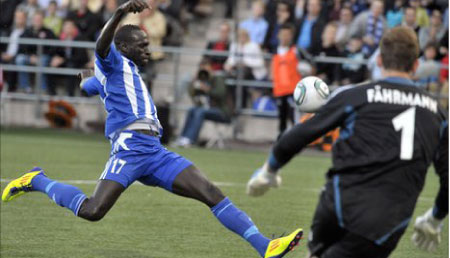 Gambia International forward Dawda Bah has made a career return to Finland after his release by German side Augsburg.

This time, he is in the jersey of fellow Finnish side KuPS and not HJK Helsinki, where he has won two league cups in 2009 and 2010.

He also won the Suomen Cup in 2008 and became runners-up in 2010 with the Finnish giants.

This gave the former Hawks footballer the opportunity to play for the side in the Champions League qualifiers.

He made his first league appearance for KuPS on Sunday 14 April 2013 when they drew 1-1 with MYPA in the opening of the Finnish top-flight league, playing 90 minutes.

Bah played for the Finnish giants HJK Helsinki for four years before making a lucrative move to the German Bundesliga where he just played a single game and got injured, which kept him out of action throughout the season.

He was released by the German Bundesliga outfit a few months ago after signing a two-year deal when he joined them in 2011.

In his short spell in German, the BBC reported in September 2011 that Dawda Bah was out of action - after just one game for his German club Augsburg.

The 29-year-old picked up a knee injury in training and immediately underwent surgery after “severe bone and soft tissue damage” to his left knee in training.

Bah came on as a substitute in Augsburg’s 4-1 Bundesliga loss to Leverkusen. He took part in an international friendly between The Gambia and Mauritania in Banjul last February.

He captained a team made of home-based players playing just 64 minutes when The Gambia was beaten 2-0.

During his first league game for KuPs over the weekend, team coach Esa Pekonen has commended him on the club’s website www.kups.fi/for his excellent gaming skills despite drawing with opponents 1-1 at home.

Bah is also in the same club with fellow Gambian Omar Colley, who is playing in the defence. 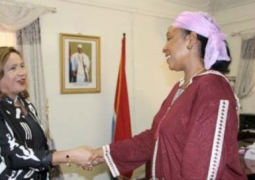