The Gambia Court of Appeal yesterday adjourned the bail appeal of lawyer Ousainou Darboe, leader of the United Democratic Party (UDP), and nineteen others, for ruling.

They are appealing against the bail ruling of Justice O. Ottaba of the Special Criminal Division of the Banjul High Court.

The case was presided over by a panel of three judges, namely Justice A. O. Adogoke, Justice Edrissa Fafa M’bai and Justice Awa Bah.

When the case was called, lawyer Antouman Gaye and team of lawyers announced their representation for the appellants, while Hadi Saleh Barkun, Director of Public Prosecutions (DPP), and team of state counsel appeared for the state.

At this juncture, Justice Adogoke told the defence counsel that there was no reply on points of law.

Responding to the judge, lawyer Gaye said they considered it “unnecessary” to reply on points of law, which was why there was no reply.

“I wish to respectfully adopt the appellants’ briefs filed on 6 June 2016,” said barrister Gaye. “It is a consolidated appeal even though the title is not showing that. We, therefore, urge this court to allow the appeal and admit the appellants to bail on such terms and conditions this court deems fit.”

While adopting the respondent’s briefs of argument dated 15 June 2016 and filed on the same date, the DPP urged the court to dismiss the appeal.

The panel unanimously adopted the appellants’ briefs and the respondent’s briefs and subsequently adjourned the case until 14 July 2016, for ruling. 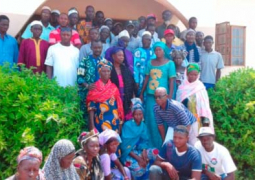