Antouman Gaye, the counsel for the two judges: Saffiatou Njie and Amina Saho Ceesay, has urged the court to either discharge the accused persons or have the charges against them withdrawn by the state.

Counsel Gaye made this supplication last Friday at the Special Criminal Court in after DPP Chenge informed the court that the state counsel, who was supposed to handle the case is busy with him on another assignment.

Counsel Gaye told the court that he was puzzled by the DPP's application that they are handling a matter and want to finish it before coming to the judges' case.

He argued that every accused person is entitled to know his fate, as required by the law.

"We are dealing with the state, and the DPP has so many assistants who are competent to deputise for him," counsel Gaye posited.

"May be the DPP is not in the position to tell when he can come back, but the better alternative is to discharge or withdraw the charges," he added.

The DPP replied that they know what is going on. "We have enough evidence, but there is something I am working on, and do not want to disclose it."

It would be recalled that the three judges: Ngui Mboob-Janneh, Saffiatou Njie and Amina Saho Ceesay, and two other judicial officers: Haruna Jaiteh and Alhagie L.S. Sonko, are charged with 13 counts, ranging from neglect of office, forgery, stealing and economic crimes.

During Friday's hearing, only three of the accused persons were in court namely, Alhagie L.S. Sonko, Haruna Jaiteh and Ngui Mboob-Janneh. 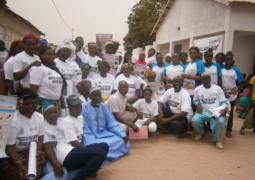