Ramatoulie Touray, who works as a court registrar at the Banjul Magistrates’ Court, yesterday testified at the same court in the case involving one Ebrima B. Njie and Edrisa Manga.

Ramatoulie Touray, a prosecution witness, testified that she lives at Sukuta and did not recognise the accused persons, and did not know Abdoulie Ceesay.

She told the court that there was a criminal case against Abdoulie Ceesay, adding that within 2015 their office prepared a remand warrant for Abdoulie Ceesay.

The said remand warrant was shown to her, which she recognized.

Prosecutor Jarju then applied to tender the said remand warrant, which bore the stamp of the court.

Under cross-examination by the defence counsel, Lawyer Gomez, the witness said the remand warrant was prepared by their office.

She added that she was not present when the document was prepared.

She confirmed that she had never seen Abdoulie Ceesay.

It was again put to her that she only knew the document which bore Abdoulie Ceesay’s name, but she did not know him.

In reply, she said all what she knew was the document was prepared by her office. 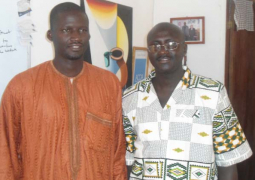