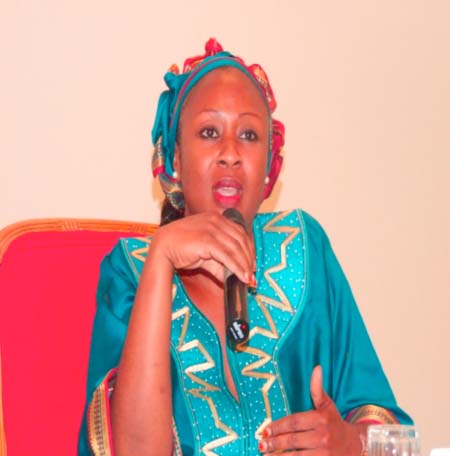 Mama Fatima Singhateh, Attorney General and Minister of Justice, has said corruption is the foremost enemy to the development of a nation, especially in developing countries.

The Justice Minister made this remark at the commencement of a two-day awareness raising and validation workshop on the Draft Anti-Corruption Bill 2016 of The Gambia, held yesterday at the Kairaba Beach Hotel.

The bill seeks to establish an Anti-Corruption Commission and also provides offences aimed at fighting against corruption.

The Justice Minister describes corruption as a broad term covering a wide range of misuse of entrusted funds and power for private gain, through the use of dishonest or unethical conduct by a person entrusted with a position of authority.

She said: “Corruption in any country weakens the framework of government agencies. It therefore has a negative impact on national development and is without doubt the number one enemy to the progress and development of any country, especially developing countries.”

Additionally, she noted, the effects of corruption also “undermine” the principles of democracy and good governance.

“It is, therefore, important for all of us to harness our efforts to eradicate corruption and corrupt practices in the country.”

Minister Fatima Singhateh also said the Gambia government, under “the active leadership of President Yahya Jammeh has not relented in its effort to continue promoting the advancement and improvement of all government institutions and services, subject to the public service accountability”.

Public service accountability, transparency and good governance are global issues in government administrations in all countries, but most especially in developing countries where issues of human rights abuses, nepotism, misappropriation  of state funds and other resources, fraud, bribery, to name but a few, have become the order of the day.

The Minister said upon becoming aware of “the disturbing prevalence of corruption in the country and recognizing its seriousness as a problem”, the Gambia government “has expressed its commitment to tackle and control the menace its poses and thus, the government is ready to put in place the required legislative and infrastructural framework to fight this problem”.

The draft Anti-Corruption Act under review is not only for the establishment of the Commission, but also a tool through which the Commission would be empowered to fight corruption and corrupt practices through investigation, prosecution, and asset recovery.

“With its negative impact on the national economy and infrastructure, the prevention requires the efforts of all stakeholders in government, non-government and civil society organisations to entrench good governance and activate competent internal control systems.

“This would enable us to raise awareness and provide comprehensive and correct information regarding the nature, extent and impact of corruption along with available anti-corruption measures.

“The Anti-Corruption Commission is, therefore, going to be the competent authority responsible for raising awareness on corruption by taking the necessary action for prevention and investigation of alleged corruption cases.”

With the enactment of the Act and the subsequent establishment of the Commission, “the Government of The Gambia is ready to not only implement the provisions of the United Nations Convention Against Corruption at the domestic level, but to also coordinate and cooperate with other nations and offer legal assistance where needed to curb economic and organised crime related activities across our borders”.

She also said in preventing and combating corruption, the civil society and the media have a very important role to play by raising public awareness, and “holding government accountable”.

Minister Singhateh further stated: “The Government of The Gambia believes that our collective efforts over the past several years have been fruitful in advancing our ultimate goal, and we look forward to more partnership and coordination to improve the effectiveness of our collective efforts.”

She thanked the UNDP for their continued support and collaboration in realizing the anti-corruption bill.