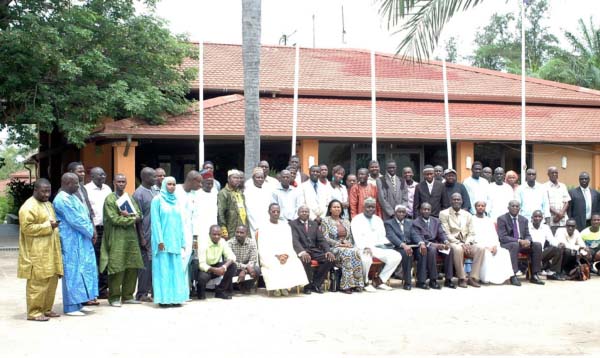 The AGM, which also saw the election of a new executive council, was part of the mandate of the associations to convene at the end the term of office of the council members, and it was also an opportunity to brainstorm on key issues affecting the associations in their drive to contribute towards the socio- economic development of The Gambia.

Under the theme: ‘Classification, Quality and Opportunities’ the congress brought together members of the two associations.

Addressing the delegates at the opening of the congress, Abdoulie Camara, the Permanent Secretary at the Ministry of Transport, Works and Infrastructure, said the Gambia government relies on the services of consultants and contractors to implement the various projects and contracts conceived and implemented by the government.

“The Gambia has set itself an ambitious target – ‘Vision 2020.’ While it provides leadership, government expects the citizenry to follow and make us all realize the middle-income and city-state objectives by 2020, together. The membership of GACSUL and the membership of GACCON share enormous responsibilities to attaining these objectives,” Camara stated.

However, he added, ‘‘we need to establish order out of chaos. The “Classification” of consultants and contractors is a necessity, if we should move ahead.’’

While recognizing the efforts of the association, PS Camara however noted that government is concerned that there have been, in the recent past, evidence of sloppy and shoddy work.

‘‘This must stop. In this regard, my ministry has set itself the task of conducting an audit of the industry to categorize the actors. This is considered necessary for healthy and fair competition to take place. It is in this light, that we welcome the debate on Classification which is due in this congress. We shall follow closely the deliberations on the issue.”

Saikou Ndong, vice president of the association, who spoke on behalf of its president, recalled that during the last congress, some resolutions were adopted and during the interim period they will address the issues, successes and failures.

Reverend Gabriel Leonard Allen said the construction industry is vast and diverse, and attracts many actors.

‘’In our country, in particular, the ‘Do-It-Yourself’ enthusiasts aggressively compete with the professionals in the business. Both attempt to translate into reality designs which may be traditional, modern or avant-garde.It is a fact of life. Nonetheless, without exception, each edifice generated must belong to a family of tested and reliable structures. Anything less would be irresponsible,” he stated.

Consequently, he went on, in the interest of all parties, buildings and civil infrastructures in our country need to be designed by authorized personnel, regulated by functional state systems, supervised by professionals, and executed by recognized contractors, noting that anything short of this rigorous process could lead to premature failures.

Ya Fatou Gaye, GACSUL Secretary, said: ‘At the 3rd congress in 2009, 73 contractors were registered; today, we have less than 50.A little over a decade ago, there were about 450 contractors registered with Gamworks. This shows that the number of contractors has been steadily declining over time.’

Meanwhile, below is the list of the newly-elected executive council members of GACCC