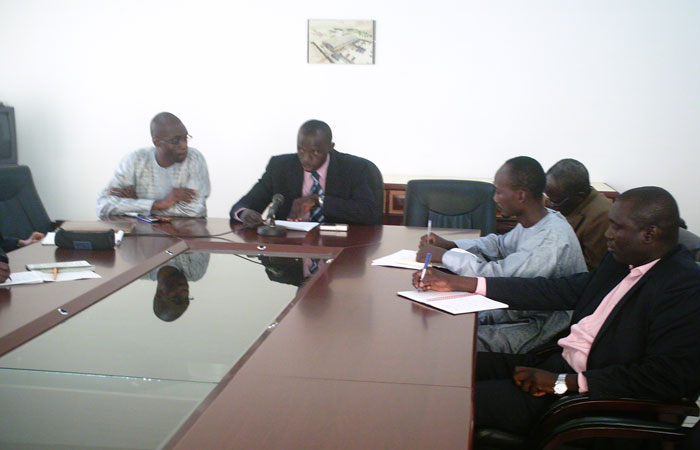 The Gambia Competition Commission is now operational following the inauguration of the commission by the Secretary of State for Trade, Industry and Employment Mr. Abdou Kolley.
In his inaugural speech at the conference room of the Department of State for Trade, Industry Employment in Banjul on Monday Secy Kolley thanked the commissioners for accepting to serve in the commission. "You may recall that the development of a competition policy and law started in 2000 when this Department of State sought technical assistance from Commonwealth Secretariat.  The long and protracted consultative process culminated in the enactment of the Competition Act in 2001, and gives added confidence to investors wishing to invest in The Gambia by providing a more predictable business environment". He said that until the Executive Secretary is appointed, his Department of State would provide the secretariat for the Commission to carry out its work. "You will agree with me that competition is one of the main engines of economic development. As such, the essential function of the competition law is to promote and protect the free functioning of those markets that are open to competition," he said. He added that the commission would be required to collaborate with key institutions such as Central Bank of The Gambia and the Public Utilities Regulatory Authority (PURA) whose regulatory activities are complementary and mutually reinforcing with those of the Competition Commission. Healthy competition, he said, enables firms to operate effectively, and offers consumers a greater choice of products and services at low prices. You are expected to keep an eye on the market behaviour and use several tools to promote competition, while checking anti competitive practices and taking appropriate measures, he said. Sensitisation of the various interests groups on the principle, scope and content of the competition law and how they can participate to make it work and on the remedies and sanctions to be taken against those engaged in anti-competition behavior will be the key features of the commission.

He expressed confidence in the commissioners and urged them to work independently with personal integrity. He assured them of his office's full support.

Speaking at the occasion, chairman of the commission, Alh. A. A Tama thanked President Jammeh through SOS Kolley for the trust and confidence bestowed on him and his team. He assured him of their resolve in meeting up to expectations while calling for support from the general public. He described competition as an essential element for business.