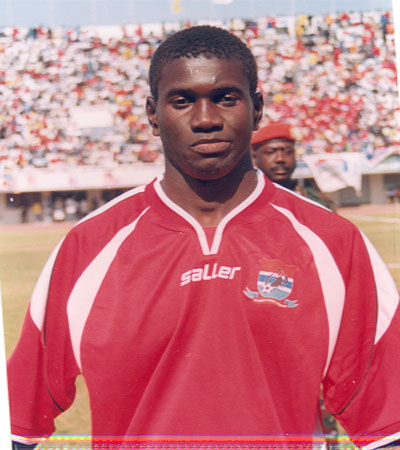 Following his suspension from the first division league of the Gambia Football Association GFA, the former U20 team captain and Hawks player Ken Malamin Jammeh is back on the field of play. He has urged all players to leave referees alone. Ken made these remarks with the Pointsports in an interview, after he was given a presidential pardon by the Gambia Football Association after a long spell of suspension. The suspension followed his violent and excessively brutal attack on the central referee Mawdo Jallow during their game with Armed Forces FC played at the Sere Kunda East Mini Stadium.

The press release from the GFA states, "following a presidential directive, I am to inform you of the nullification of the indefinite suspension of Mr. Ken Malamin Jammeh of your club for his violent and excessive brutal attack on the central referee Mawdo Jallow during your first round league match against Armed Forces played at the Sere kunda East Mini Community field.

Mr. Ken Malamin Jammeh is now free to take part in all the future matches of your club".

"You are forewarned to be in your best behavior at all times and to refrain from such a violent and an unsporting behavior," the press release concluded.

I am very pleased and satisfied with the decision and it is a good lesson for each and every player to learn from. The whole team welcome him back, he is always in training even when he was suspended he always came for training," he stated.

In his reaction Ken Jammeh said that he is very happy that he was forgiven to come back to play and is " assuring all Gambians that what happened will not happen again. I am appealing to every player to leave the referees alone'. He then thanked all those who were behind him during this sad memory and promised them that this will not happen again that he has learned a big lesson from this. Ken also sent a special thanks to his fans and the coaches after the comments they made to see him back onto the field of play.

Meanwhile in another development 5 Gambians are suspended for the next two games due to their  scuffle with the Algerian players during the CAF qualifiers for the CAN 2008.

The players are Ousman Jallow, Lamin Conateh, Abdoulie Corr Assan Jatta and Habib Kunta who is suspended for slapping an opponent during the Gambia/ Mauritania match played in Nouakchott.

The players will miss The Gambia's games against Liberia and Senegal on June 1st and June 6th 2008.